The following article originally appeared on August 18, 2022 in Biocompare.

What is bioprinting and where can it be useful?

Bioprinting has its roots in 3D printing, a technology that provides depth to printed matter. Specifically, by distributing cells and other materials (e.g., extracellular matrix) such that they mimic natural tissues or organs, bioprinting allows researchers to model complex biological systems without having to follow laborious manual workflows.

To date, applications of bioprinting have been mainly focused on organoid research and regenerative medicine. By using a bioprinter for generating organoids, researchers can eliminate the inevitable user-to-user variability associated with manually producing hydrogel domes. And, by bioprinting tissues like skin, blood vessels, muscle, and bone, it is possible to reproduce these systems more accurately in vitro to investigate how they might be used for regenerative purposes. 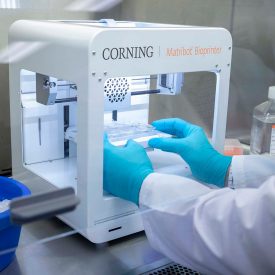 What tools are available to use for bioprinting?

Bioprinters fall into four main categories. The first of these, inkjet-based systems, use heat or vibration to spray droplets of the ‘bioink’ on to the surface of the culture vessel. Although relatively inexpensive, inkjet-based systems are often incompatible with many of the high-viscosity liquids required for generating organoids and tissues.

Laser-assisted bioprinters instead function by depositing the cells and any extraneous material in layers. They provide high precision and are suitable for bioprinting more viscous materials, but have an increased risk of causing cell damage due to the use of heat.

Bioprinters based on the use of electric fields offer the highest precision. However, this comes at a price and methods must be rigorously optimized to avoid causing cellular damage.

In addition to instrumentation, numerous reagents are available for bioprinting applications, many of which were originally developed for manually producing 3D cell cultures. One of the best-known examples is Corning® Matrigel® matrix, a solubilized basement membrane preparation that has been used extensively for organoid research.

More recently, various sacrificial bioinks have reached the market. These are useful for constructing vascularized tissues, channels in microfluidic devices, and supporting scaffolds for more complex tissue constructs, as well as for performing validation experiments prior to bioprinting live cells.

How easy is it to get started with bioprinting?

Although researchers who are new to bioprinting can certainly benefit from having some prior knowledge of the underlying techniques, systems are now available that eliminate many inherent complicating factors.

One such platform is the Corning Matribot® Bioprinter, an extrusion-based system that was designed for use with temperature-sensitive hydrogels such as Matrigel matrix. A main challenge when handling Matrigel matrix is that it undergoes gelation at ambient temperatures. Consequently, both the Matrigel matrix and any pipette tips used for sample handling must remain chilled to avoid premature polymerization. The Matribot bioprinter overcomes this problem by incorporating a cooled syringe printhead and a heated printbed, ensuring that the Matrigel matrix sets only once it has reached the culture vessel.

Popular applications of the Matribot bioprinter include its use for generating organoid-containing Matrigel matrix domes, as well as for bioprinting more complex, layered geometries. Importantly, the Matribot bioprinter’s compact footprint allows for its placement inside a biological safety cabinet—a critical consideration when working with patient-derived samples such as tumor cells.

What are some factors to consider for bioprinting?

Like any other research technique, bioprinting requires optimization. One of the most important factors to consider is the nature of the system being investigated, which will vary depending on the cell types involved. For example, endothelial cells may need a different ECM to muscle cells, whereas other cell types such as keratinocytes and corneal cells often require a supporting network of fibroblasts or stromal cells, respectively.

It is also sensible to think about experimental throughput. While a study using brain-derived organoids for unraveling developmental signaling pathways may be best performed in a Petri dish to enable further downstream investigation, higher throughput applications such as drug screening may be better suited to using 96- or 384-well plates.

Whatever the purpose of the study, it is critical that the cells have high viabilities from the outset. This means maintaining cultured cells in log phase growth and storing tissue material appropriately upon harvest to prevent unwanted cell death.

To learn more about the Corning Matribot Bioprinter and the types of applications it supports, visit www.corning.com/matribot