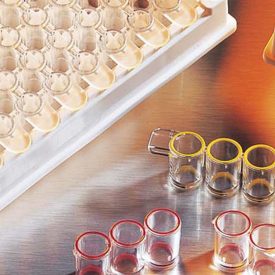 An ELISA (enzyme-linked immunosorbent assay) is an assay technique used to measure analytes such as peptides, hormones, and other antibodies in solution. Also known as enzyme immunoassay (EIA), the technology uses a reporter molecule linked to an antibody to signal analyte concentration, notes Stat Pearls. According to the British Society for Immunology, ELISAs are often plate-based, easily automated once validated, and reliant on a strong antigen-antibody interaction for performance.

ELISAs were first developed to replace the radioactive iodine tag commonly used in radioimmunoassays (RIA). They usually comprise a 96-well plate format with antigen (direct and indirect ELISAs) or antibody (sandwich and competitive ELISAs) bound to the wells. Through a series of blocking wash and detection steps, the concentration of analyte in the biological sample under test is measured, usually in comparison with a serial or standard dilution curve of known antigen concentrations.

There are three different formats in common use as detection systems in ELISAs: colorimetric assay, luminescence and fluorescence. As described in this Corning application note, all rely on a method that shows a quantifiable change in the reaction medium, usually chromogenic, which is dependent on the concentration of the analyte. Developing the color change takes place at the end of the ELISA process with the addition of an enzyme substrate reagent that reacts with the enzyme-linked reporter.

The most common reporters conjugated with the antibody are horse radish peroxidase (HRP), alkaline phosphatase (AP), and beta-D-galactosidase (BG). All three are stable, inert under standard assay conditions, and relatively easy to use.

HRP is a small molecule, and as such, when it's conjugated with the assay antibody, it does not cause steric hindrance and interfere with antigen binding. It is, however, affected by certain common preservatives, such as sodium azide, and can also be influenced by endogenous peroxidase activity in biological samples. Ensuring an adequate wash step during the ELISA usually mitigates interference.

AP is a larger molecule, so care must be taken to avoid steric hindrance. Detection also requires stricter conditions, so AP-specific assay buffers should be used. BG is an even larger molecule but is preferred for hydrophobic membrane surfaces such as dot blots, since the alcohol used as a wetting agent enhances detection.

ELISA assays are read by measuring the action of the reporter molecule on an enzyme substrate added as the final step in the assay. The choice of substrate depends on the assay format. For example, an insoluble end result is best for membrane-bound reactions such as dot blots.

Other considerations include the range in expected concentrations, assay timing, sensitivity, and detection device in use. For example, with a wide range of concentrations expected, using an enzyme substrate that reacts over 15 to 30 minutes may give the best results. Sensitive assays with very low analyte concentrations require fast-acting substrates. Assays with a timed endpoint include a termination step that stops and stabilizes the reaction prior to reading. It's also possible to monitor the rate of conversion by taking multiple measurements over a timed period to show kinetic analysis.

Colorimetric assay detection shows a color change that can be quantitated in the visible light spectrum, where optical density varies with concentration. It is important to incubate consistently to allow all wells to develop equally before reading the plate.

Fluorescence immunoassays use enzyme substrates that fluoresce when excited by certain light wavelengths. They are usually as sensitive as colorimetric assays but are not limited by higher analyte concentrations. In other words, they can glow more strongly without overwhelming signal detection, thus giving an accurate reading.

Luminescence detection in ELISAs relies on bioluminescence, where the light is created by biological substrates, or by chemiluminescence where the photons are released following a chemical reaction. Luminescence is considered the most sensitive method for ELISA detection due to the technique's compatibility with signal multiplication and amplification.

Starting materials are key. Choosing the right lab equipment for your ELISA is important. Something as simple as microplate design can influence the data collected. Since light is what is being measured as the reaction end point, select clear plates for colorimetric, black for fluorescence, and white for luminescence ELISA detection.

For example, when measuring fluorescence assays, it is important to use materials that avoid light scattering between wells. Using plates designed for fluorescence assays also avoids fluorescence from plastics. Researchers should be aware that certain biological fluids show background fluorescence; appropriate dilution steps can help prevent this interference.

Adequate mixing within the wells is also a priority. Consider using a microplate shaker or a plate reader with an integrated shaking bed in your lab set up. Optimizing your workflow also creates good data: Minimizing edge effect by preventing analyte evaporation and ensuring proper pipetting can mean that all wells in a microplate give good non-biased results.

As with all lab protocols, paying attention to assay design and understanding the analyte under investigation are key to ELISA success.