Often, it is assumed that suspension culture is the only viable option to achieve scale-up but, in some cases (e.g., when the primary cells are of a biological type that requires adherence), adherent scale-up is a more effective choice. Many adherent platforms exist, ranging from standard cell culture flasks to fixed-bed bioreactors, and cells often must be adapted from adherent to suspension culture. In these cases,  technologies exist to bridge an adherent cell line and a suspension bioreactor — for example, microcarrier technology, wherein the beads are suspended in culture media and act as the solid support for adherent cells, which attach to the beads. However, in the case of cell therapies, current technology is not yet ideal because the microcarriers must be removed from the final product. Still, new developments emerge daily in research labs that could be translated into improvements in a GMP environment in the future.

Planning for a Short- and Long-Term Solution

Waisman clients’ primary challenges mirror those of any cell therapy solution provider: ensuring scalability and high yield at an acceptable cost and within the shortest possible timeline. Each client also attempts to reduce its cost of goods sold (COGS) without sacrificing quality. Larger contract manufacturing organizations (CMOs) might be able to “overpower” scale-up by simply throwing more people at a project, but more modestly sized organizations must discover novel ways to meet clients’ COGS requirements.

When Corning HYPERStack vessels became available, Waisman recognized the technology as an opportunity to increase and optimize the surface area/volumetric footprint ratio of its equipment. The aim was to increase scale without significantly increasing cost. The change from Waisman’s legacy Corning CellSTACK 10-layer vessels to HYPERStack 36-layer vessels led to “dramatic” COGS improvement. The upgrade represented a roughly 250% increase in cell production capacity for the facility, versus a 20%-25% increase in operating cost. Additionally, the change negated the need to extensively renovate the facility, acquire more incubators, or hire more people.

Thus, Waisman Biomanufacturing implemented additional capabilities for its facility and new platforms to apply to any allogeneic cell therapy product, or even to viral vectors made in adherent cell culture — all serving its growth in the long term. And, in the short term, the new HYPERStack vessels were applied to complete a client-specific application. The client was excited to collaborate with Waisman to expand its cells to the HYPERStack platform, to increase their scale while not dramatically increasing COGS, as well as to gain experience with the technology. 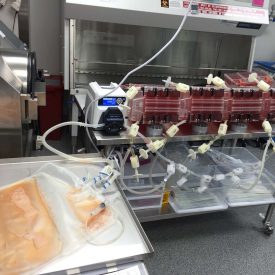 Figure 2. Tubing manifold systems connect multiple HYPERStack vessels — to wash and change media, as well as to harvest the cells in a scalable and fully aseptic way.

To create a consistent and reliable process for cell scale-up (i.e., used to create master and working cell banks, as well as the final product, for allogenic cell therapeutics), Waisman worked toward two key goals: first, to develop and maintain a fully aseptic process. The cells can't be otherwise terminally sterilized, and Waisman wanted a process that worked on the benchtop in an ISO 7 cleanroom. Second, Waisman had to ensure cell reproducibility — consistent manufacturing from the early program stages of master and working cell bank production to final production.

Challenges associated with the second goal, cell reproducibility and scalability, include accessibility. One cannot easily look inside layer 18 of 36 to examine what is going on with the cells. However, Waisman needed to have confidence cells were growing uniformly — not within just one HYPERStack, but across all 15 units. Waisman overcame this issue during process development by growing cells in parallel in both 10-layer Corning HYPERFlask vessels and 36-layer HYPERStack vessels — using the HYPERFlasks as sentinel vessels to monitor cells and then comparing total cell counts, viable cell counts, and other cell characteristics related to potency between the HYPERFlask and HYPERStack vessels. This comparison engenders confidence that process developers’ time points for changing media and for harvest are effective and scalable.

Ultimately, cell therapy clients own their process. When evaluating a client-specific product, like all various cell therapy applications, the technology and process applied inform the pricing. Waisman Biomanufacturing’s pricing, for example, is based on production capacity — running 15 36-layer HYPERStack vessels for a process, while making assumptions about harvest density based on either early client data or just general assumptions, to provide clients a price per deliverable. That said, it warrants mention that harvest density is based on the process scale Waisman is able to achieve, rather than an exact cell deliverable. Ultimately, a client moving later into clinical development would gather its batch records and other data, building their own facility to continue or applying lessons learned at a different CMO facility.

Just as Corning Life Sciences was able to work with Waisman Biomanufacturing, providing platforms to optimize and scale up cells for cell therapy, they can help other CDMOs and CMOs meet their production capacity and COGS needs. To learn more, visit www.corning.com/lifesciences.

Brian Dattilo, Ph.D., is the Director of Business Development at Waisman Biomanufacturing. Dattilo earned his Ph.D. in biochemistry from Vanderbilt University, where he focused on recombinant protein production, purification, and analytical characterization. Prior to Waisman, Dattilo served as a program manager at the Biomedical Advanced Research and Development Authority (BARDA), where he was responsible for a multi-million-dollar development budget supporting novel platform technologies and their application to vaccine, biological therapeutic, and diagnostic development for pandemic influenza and biodefense applications. Since joining WB in 2012, he has led client interaction, technical product development plan development, and project budgeting and cost estimation, as well as built business cases for new platform investment.

Waisman’s team of cell culture specialists have a broad range of experience that enables us to optimize the culture parameters unique to each product cell line. Working in close contact with each client, we develop a cell culture process and cell banking program that meets CGMP/ICH requirements. Our facility houses five cell therapy suites that are specifically designed for the cultivation of mammalian cells for use in cell therapy applications including production of master and working cell banks for biologics production and cell and gene therapies. To learn more, visit us at www.gmpbio.org.