The following article originally appeared on January 21, 2018 in The Cell Culture Dish here. 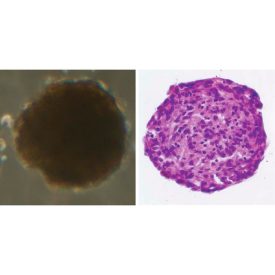 Unlocking the complexities of cancer is an ongoing challenge. Luckily, a countless number of researchers are working every day – determined to understand the causes and behaviors of cancer in search of new and better ways to more effectively treat the disease.

There is a lot of expectation about modeling cancer organoids but is there an application of Corning Fluoroblok inserts to track immune therapy with an organoid culturing into Corning Biocoat Matrigel Invasion Chambers? In other words, can I culture an organoid in the inner compartment and then tracking the effect of the immune therapy?

Assuming you are looking to culture a cancer organoid in the apical chamber of Corning FluoroBlok Cell Culture Inserts and measure immune function, then the answer is most likely.  Although it does not appear much published work has been done in this area, FluoroBlok inserts are a great choice when one is looking to exclude fluorescent signal generated by cells on the apical surface of the membrane. Even though they are typically used for migration and invasion assays, they may find some use here. It is also possible to combine Corning 96HTS inserts with the Corning spheroid microplate in order to look at immune cell migration/invasion towards the cancer organoid. Corning scientists have done a similar assay with NK92 cells and a lung cancer cell line.

I am looking for a reliable transfection protocol for DU 145 prostate cancer research. Any recommendations?

Although Corning does not have any DU145 specific transfection protocols, we do know that DU145 as well as many other prostate lines behave differently in 3D as opposed to 2D. 3D transfection is possible in Corning Matrigel matrix, as well as in Corning Ultra Low Attachment vessels and Corning spheroid microplates. There are several protocols for 3D transfection that can be found in the literature as well as some commercially available 3D transfection kits. We’ve included some helpful links below:

I am exploring some high-throughput options for screening spheroids. Do you have any suggestions?

There are numerous options for high-throughput screening spheroids. The right option will be dependent on what you want to measure and the instrument available to you. A good homogenous method for assessing viability is using Promega’s CellTiter-Glo 3D reagent to measure ATP. It’s important to use the 3D version of the reagent since spheroids typically require stronger lytic reagents than what is required for a 2D monolayer assay. It’s also possible to use high throughput imagers via phase or fluorescent microscopy and image analysis software to quantify changes in spheroid size, metabolic activity and fluorescent staining.

I don’t have a specific question but was wondering if you could tell us about which promising new cancer research tools you think will make the most impact.

There are many exciting things happening in the cancer research space, but two areas that we feel will have the largest impact on cancer research in the next few years are through improved modeling and superior imaging. An interesting trend we have noticed, is that the technologies are not necessarily all new, but have been reimagined by researchers to be used in new and innovative applications. With tools such as Ultra-low Attachment microplates and ECM’s like Corning Matrigelmatrix researchers can create 3D cancer models that are more complex, and what’s more is that they are easier to develop and are more consistent than ever. These 3D models do a much better job capturing the complexity of the cancer environment compared to more traditionally used 2D models. Imagers that have confocal capabilities are also likely to play an important role in cancer research and personalized medicine as they can deliver so much more information than instrumentation of the past.

I am interested in learning more about laminins, I think you offer these, and which types of culture they can be beneficial in.

There are several different formats of laminin available. Here is an overview of what Corning offers, whether vialed (murine), coated, or recombinant (human).

What do you think is the most successful ECM, culture vessel combination for culturing colon cancer spheroids?

A great option for this type of work would be ultra-low attachment plates like the Corning spheroid microplate as an optimal cell culture vessel. They are easy to use, promote formation of one organoid per well of uniform size and allow for fluorescent, luminescent and imaging assays to be conducted right in the culture plate. As far as ECMs, Corning Matrigel matrix has always been considered the gold standard. It is the most cited ECM and is routinely used for 3D cell culture applications.

Advice on the most efficient way to differentiate between live and dead cells when using flow cytometry?

Hoechst is great for counting all cells since it stains all nuclei (live and dead cells). To enumerate dead cells we routinely use Propidium iodide (PI). PI is a membrane impermeable dye that is excluded form viable cell membranes. If your cells are positive for PI they are most likely dead or apoptotic. Both stains are incorporated very quickly into cells at low concentrations.

I am looking for an efficient and easy way to isolate B cells from whole blood without using magnetic beads. Any suggestions?

The first step in B cell isolation is to isolate mononuclear cells from whole blood through centrifugation with a Ficoll gradient. There are many different B cell isolation kits that are commercially available, however, you will find it difficult to find one that does not use magnetic beads as part of the isolation process.

At ISSCR this year, I went to a talk on co-culturing tumor spheroids and immune cells to create cancer models. I have also seen fibroblasts used in the same way. Do you have any resources to learn more about creating this type of model. I have seen papers on various models, but I am looking for resources for how to create these in the lab.

One of the simplest methods to create co-culture spheroids containing multiple cell types is to seed the different cell types together into a low attachment round bottom plate such as the Corning spheroid microplate. The cells can be seeded at the same time or added at different time points. PBMCs were also included as a treatment in the wells, but were not shown to be incorporated into the spheroid. When working with multiple cell types some optimization may be required. For example, different media conditions may need to be tested and some models may require the addition of extracellular matrices such as Corning Matrigel matrix. The cells may also have different doubling rates so cell seeding densities for each cell type may need optimization as well.