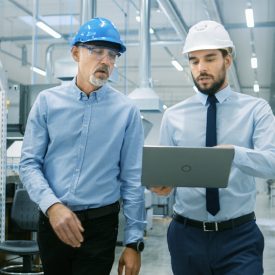 Manufacturing has evolved significantly in recent years as the factories that create the products we use daily become more than just production hubs. In the past, factories were straightforward assembly lines, but today they rely more on technology and internet connectivity, often requiring non-stop communication between robots or computers from start to finish in the production process.

As the sector has transformed, so has its technological needs. The size of factories may continue to expand as companies grow their businesses, but the technology they rely upon is only getting smaller and more connected. More processes are automated than ever, meaning the demand for bandwidth is constantly growing. If networks aren’t reliable enough and cause lags in communication, an entire day’s production could be at risk – a delay of even a split second can upend operations.

A notable shift in manufacturing now is the transition from Wi-Fi to 5G. The mass adoption of Wi-Fi was one of the most significant changes factories underwent in recent decades, providing companies with the networks needed to stay connected and produce like never before. Wi-Fi still has its role in manufacturing today, but that role is increasingly being supplanted by the greater capabilities of 5G. Today, companies are not asking the question of if to transition to 5G – it’s a matter of when.

The road to 5G

We first have to look at the origins of Wi-Fi in manufacturing to understand how we got to today’s debate between traditional networks and 5G. Network devices and systems were traditionally connected via dedicated cables, with different protocols set in place based on a business’s specific needs. This approach later evolved into connecting into the network via Ethernet, with Wi-Fi later coming as a wireless option. While a good portion of manufacturers made the choice to go wireless, for many, the return on investment simply wasn’t there. These manufacturers instead opted to maintain their traditional cable connections and delay the switch.

Fast forward to today and we see that 5G is able to make the jump to wireless possible for these late adopters in ways Wi-Fi never could. Cabled equipment has an associated cost with it that hindered agility and limited the ability for manufactures to expand or adapt. 5G presents an opportunity for business leaders to finally make that jump to wireless at a much lower cost than what was previously offered by Wi-Fi.

5G also presents a chance for manufacturers to improve their operations. Two of the key differentiators between the wireless options are reach and penetration. Wi-Fi allows users connect from a much shorter distance from the from the source, whereas 5G can travel for miles – an upside for factories with a massive footprint, such as an auto assembly line. There’s also the question of signal penetration – 5G  doesn’t encounter issues until extremely high frequencies are reached, while Wi-Fi has an overall lower penetration level to begin with regardless of frequency level.

In looking at the two options, it’s also important to consider the purpose each was created to serve. Wi-Fi was built around the idea of a single-user setup, such as a home or school, with a best-effort protocol in place. This protocol prioritizes users on a first-come, first-serve basis – once the “seats” on the network are taken, issues such as lagging speed and reliability occur. 5G, on the other hand, was born from the demand for higher bandwidth. It does not encounter the same protocol issue as Wi-Fi and instead offers users the chance to connect with the network simultaneously with ease of use.

Certain manufacturers have to be, for safety reasons, strictly conscientious when building the infrastructure for networks, such as a petrochemical refinery that must be wired within explosion-proof facilities. This can substantially drive costs on the capital side, but wireless 5G addresses that by reducing costs and providing the adaptability to fit any environment. 5G can also turn workers’ mobile devices into actual factory-floor tools, connecting them with a private network to communicate and perform tasks within a company. There’s even the opportunity to develop apps specific to a company’s needs that can be easily downloaded to a phone and make working more efficient.

How 5G will lead manufacturing into the future

As manufacturers determine whether to make the switch to 5G, it’s crucial they outline how its capabilities can better meet their current and future need. With 5G, companies can expect:

The private networks that LTE and 5G enable are the true differentiator, as they keep businesses connected in an efficient, reliable manner. Manufacturers are also able to make the transition into 5G without being too concerned with risk. Companies have already proven that the transition is beneficial and worth the investment, and the number of providers has grown to a point where reliable service is not just expected, but mission critical as well.

At Corning, we’re more than equipped to help manufacturers in all industries make the switch to 5G. Our team has decades of experience supplying the indoor infrastructure needed to build these networks, and our expertise is unparalleled. While others may try to adapt home networks or outdoor systems in an effort to build the right indoor system, Corning applies a tailored approach for each company, providing reliable and fast service. We also offer a full family of cellular products to get you started on the migration to 5G, such as our Distributed Antenna Systems (DAS). For more information on our 5G capabilities, visit our 5G hub.

Eldon Prax has over 35 years of experience in RF communications, systems design and integration. He holds 13 patents and has served Corning in various capacities such as product line management and commercial technology.