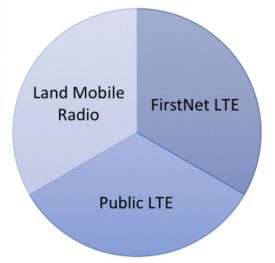 The third dimension? What are you talking about? Over the last several years, our changing public safety wireless landscape has grown from a single dimension of land mobile radio (LMR) to three dimensions we see today:

What is FirstNet LTE?

There are many drivers for FirstNet, but at the core there is a desire to bring high-availability, innovative, and life-saving broadband service capabilities to the first responder. Because of the critical service demands, public LTE was found lacking in the capability to reliably support public safety.

The FirstNet architecture aims to holistically address the gaps in the public LTE networks to raise the availability and capability of LTE to the standards required for public safety. AT&T, who was selected to build and manage the FirstNet network (March 2017), is doing major work to deliver on the architectural requirements.

Here’s a brief outline of the FirstNet LTE network enhancements:

Core Network - FirstNet is operated on a separate national evolved packet core (EPC) network. This provides first responders with their private infrastructure. This fosters the ability to create groupings by area, agency, and role that would be hard to layer onto the present public LTE core. FirstNet is advertised as Public Land Mobile Network (PLMN) 313-100.

Spectrum – Band 14 in 700MHz has been allocated across the USA for public safety. Because of coverage/capacity issues, spectrum in use, non-Band 14 mobiles, and other factors, AT&T is advertising FirstNet on other available spectrum in an area. This approach was confirmed on Reddit in early 2018 with the FirstNet equivalent PLMN appearing in LTE messaging on AT&T bands other than 14. This allows the provisioning of FirstNet devices onto the FirstNet network’s EPC in advance of the availability of Band 14 infrastructure. Also, this enables older devices that are not Band 14 capable to participate in the FirstNet infrastructure as the cost of acquiring all new mobile devices is prohibitively expensive for most agencies.

Preemption – In a local or regional emergency, cellular networks get crushed with traffic. Since networks have technology (a cell has finite resources) and business (no ROI) capacity limits, FirstNet participants had to lead the development of a strategy to prioritize network access for first responders. This strategy is called “ruthless preemption.” The good news is that most of the changes are in software such that new mobiles or base stations are not required. A FirstNet SIM should be the only requirement as the network will recognize FirstNet-enabled device profile and treat it correctly. What does preemption actually do? In short, normal subscribers who happen to be attached to a Band 14 base station are preempted by a number of methods: shifting from a cell, disconnected, denied service, suffer reduction in resources, or barring. This preemption clears the Band 14 cell(s) impacted by the emergency so first responders have the best available service.

There are five parameter sets that are used by mobiles and base stations that govern how  mobiles and their onboard apps will be treated in a congested cell:

What Does FirstNet LTE Mean Indoors?

So, if we think about everything discussed so far about FirstNet, how will this impact those of us that support cellular deployments in office buildings, campuses, or venues?

For signal distribution using DAS infrastructure, either public safety or cellular, decisions will need to be made on support for Band 14. If the headend and remotes cannot support Band 14, does the vendor have or plan to have it available? If so, what would the overall project cost total up to for Band 14 support upgrade? In some cases, a small cell overlay of Band 14 will be a more cost-effective solution and could bring additional benefits around location services.

At the headend of the DAS, a Band 14 base station or small cell signal source will be required to feed the DAS. High-capacity small cells are a great alternative to a full base station as far as resource consumption. For example, a low-cost 6-sector small cell installation occupies 5U (8 ¾“) of vertical space in a 19-inch equipment rack, uses two 110 VAC outlets, and generates around 650 BTUs of heat. Compared to the physical and HVAC footprint of a standard base station, small cells at the headend have merit. But no matter what is chosen for Band 14 support, it will be an APPROVED system that is running software featuring the set of necessary preemption features for attached public safety mobiles and a dual core connection to public LTE and FirstNet LTE. Depending on the transport network configuration of the building, the existing IP network connection could be shared or an additional one installed to reach AT&T FirstNet security gateways at the border of the core network.

Small cell overlays have their own features and benefits. The majority of vendors providing small cells use 1Gbps Power over Ethernet plus (PoE+) as the network interface into the radio. This can simplify installation of small cells in standalone Band 14 application. Things to watch for on selecting small cells when you’re in a GPS denied area (small cells can’t see the satellite cluster) involves cabling for GPS. Some small cells don’t require GPS and don’t require a GPS cable (good). But for those that do, GPS cabling and signal distribution can add up to a mighty big number real quick (not so good).

Finally, from a design perspective, Authorities having jurisdiction (AHJ) may choose to apply additional availability features around environmental survivability and/or uptime after power loss. How these features will apply to the FirstNet design templates will sort themselves out over time.

In this technology evolution, we are seeing the culmination of the desires of first responders to have cellular broadband capability that is as robust as LMR has traditionally been. In our world, there are huge numbers of projects to come that will add Band 14 capability to new buildings and retrofit older buildings so the day that a first responder has to take care of us, they can.