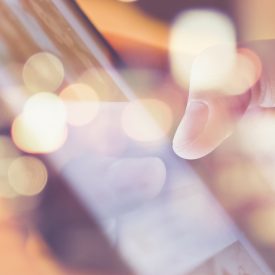 The introduction of smartphones put a phone, a computer, a music player, and a TV in every person’s pocket. Mobile phones that could just make calls and send short texts had become common by the late 1990s. The BlackBerry 850, released in 1999 with a monochrome screen and tiny thumb-typing keyboard, popularized wireless email.

But the smartphone revolution really kicked off once Apple released the first iPhone in 2007. “Apple Reinvents the Phone with iPhone,” the company declared in a press release that described the phone as three products in one: a high-quality phone, a music player, “and a breakthrough Internet communications device with desktop-class email, web browsing, searching and maps.” The company sold nearly 12 million iPhones the first year and more than 20 million the following year. Other companies such as Samsung, Motorola, and Nokia developed competing smartphones.

The new business of smartphone apps took flight. WhatsApp, founded in 2009, by 2020 had 2 billion users worldwide - the single most popular app on the planet. Other apps altered whole industries. Uber, also founded in 2009, changed the way people get around. Podcasts arose as a powerful new medium, which has meant that audio files have had to move through networks to end users.

The new smartphone era meant millions of people were suddenly sending and receiving web pages, media, emails, and calls via radio waves to cell towers, where the data would get aggregated and channeled into optical fiber lines to travel to servers all over the planet. Cell networks got faster – 3G, then 4G, and with 5G now emerging in the horizon – allowing users to seamlessly send and receive ever increasing amounts of data. Wireless devices would account for 388 billion megabytes of data usage in the U.S. in 2010. In another two years, that would more than triple. If not for the fiber to carry all that data, the mobile explosion could never have happened.

Wireless devices would account for 388 billion megabytes of data usage in the U.S. in 2010. In another two years, that would more than triple. If not for the fiber to carry all that data, the mobile explosion could never have happened.

While the rise of smartphones has spanned the globe, ownership and usage varies greatly by country. In South Korea, Israel, and The Netherlands, 90% of the population owns a smartphone, according to Pew Research. In developed nations such as Poland, Russia, and Greece, it’s more like 60%. In Indonesia, Kenya, and Nigeria, 40%. Interestingly, smartphone ownership is lowest in India, at 24%, yet because of its enormous population, that still translates into a boom in smartphone data transmission.

View the next installment in the History of Optical Fiber: Cloud Computing And Software As A Service