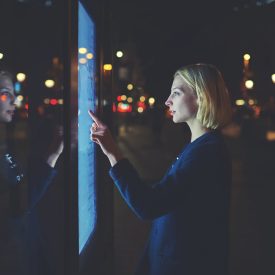 In conjunction with the rise of smartphones, the concept of cloud computing took flight. “Software for rent,” read a headline of a 2007 New York Times article about the new trend of turning software into a service over the Internet.

Salesforce.com, founded in 1999, led the charge to convince companies to stop operating their own computers and storage and instead rely on computing “in the cloud” and operated by a third party in massive data centers. Amazon Web Services (AWS), launched in 2006, allowed companies to buy cloud computing almost as easily as buying an Amazon book. AWS’s revenue grew from $3.1 billion in 2013 to $35 billion in 2019.

As business shifted to the cloud, so did consumers, using social media platforms to not only connect, but also to store photos and files. Facebook, founded in 2004, already had 100 million users in 2008 (and 2.5 billion in 2019).  Meanwhile, YouTube users were uploading 500 hours of video every minute.

By 2009, the world would be measuring overall monthly data traffic not in megabytes, gigabytes, terabytes, or petabytes, but exabytes – one billion gigabytes.  More than 10 exabytes a month moved around the planet in 2008, quadrupling to 43 exabytes by 2012. By the end of the decade, “cloud computing” had just become…computing.

Today, most software operates within the cloud. Companies store much of their data somewhere besides on their premises. Consumers store files and media on services such as Dropbox and Google Drive. While fetching a document or image used to mean it would travel a few centimeters from a computer’s hard drive to that same computer’s screen, now it could mean that it travels thousands of miles from data center to device.

By the end of the decade, “cloud computing” had just become…computing.

Moving this vast amount of enterprise and consumer data over such a distance – through fiber-optic lines, cell towers, and Wi-Fi – would require an innovative mindset to achieve. Essentially, the cloud was a global network of optical fiber transmission lines. Data centers, too, had to keep up. In 2007, Corning released a bend-insensitive fiber called ClearCurve® optical fiber, which can bend at 90-degree angles without sacrificing performance. That opened the door for connections in locations previously inaccessible to optical fiber, and it paved the way for Corning's EDGE™ data center solution, introduced in 2009. EDGE allowed data center operators to simplify their layout, which aided in the development of hyperscale data centers to handle cloud computing. Today EDGE solutions are deployed in over 50,000 data centers in 30 countries.

By 2010, an enormous global infrastructure had been built to support the explosion of cloud and mobile computing, constantly moving exabytes of data from data centers to users and back again.

The next decade saw further breakthroughs including 100Gb/s, 400Gb/s and more recently 800Gb/s single wavelength coherent transmission systems and additional advances in fiber that brought the attenuation down to 0.15dB/km. These commercially available ultra-low attenuation fibers, like Corning SMF-28® ULL and Vascade® EX2000 fiber supported the path to even higher network capacity by enabling higher data rates without compromise on transmission reach across the globe.

The need for high-speed optical links migrated from fixed-line into mobile applications with 4G and then 5G services, meaning access networks required still more connections. All these connections, in turn, required additional computing power, which meant data centers had to evolve, too, with architectures geared toward high-density connections. To meet these needs, cabling innovations such as Corning’s RocketRibbon™ extreme-density cables emerged. These provided the connection coverage needed to harness the power of 5G in access networks and to enable cloud computing in data centers.

Innovations like these enabled the next episode in our new world of IoT, artificial intelligence, and virtual reality.

View the next installment in the History of Optical Fiber: The COVID-19 Crisis And A New Era Of Connection