A Dot-Com Data Explosion with Super-Fast, High-Bandwidth Optical Fiber Communications | A Timeline of the History of Fiber Optics Technology | Corning 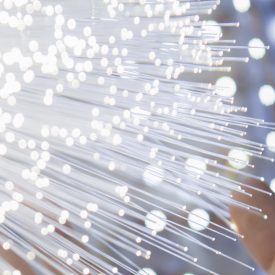 When the 1990s began, no one had a web browser. Only 42% of Americans had even touched a computer.

By the end of the decade, the dot-com frenzy was reinventing the way we lived our lives and recasting entire industries. Newspapers, stores, flight reservations, work, and entertainment had begun to move onto the nascent World Wide Web.

None of it would have been possible if not for the super-fast, high-bandwidth optical fiber communications networks that were getting built around the world. By 2000, there was a near-unquenchable demand for bandwidth that could only be fulfilled by fiber.

The new era of the internet unfolded in a flash. It began when Tim Berners-Lee, a software engineer working at CERN, a European research center based in Switzerland, got frustrated because it was so difficult for CERN scientists to share their ideas and data across incompatible platforms. So, in 1989, Berners-Lee proposed to his bosses an idea for a system he initially called Mesh. A year later, Berners-Lee had developed three fundamental technologies that still serve a foundation for today’s web: Hypertext Markup Language (HTML), Hyptertext Transfer Protocol (HTTP), and Uniform Resource Locator, which today we call a web address, or URL. That same year, Berners-Lee posted the first web page on what, by then, he was calling the World Wide Web.

In 1993, Berners-Lee and CERN decided to put the source code for the web into the public domain, making the web an open and democratic platform for all. That same year, Marc Andreessen, a college student at the University of Illinois, Champaign-Urbana, developed the first web browser, dubbed Mosaic. “Think of it as a map to the buried treasures of the Information Age,” the New York Times wrote in a story about Mosaic.

By the next year, the fuse on the dot-com explosion was lit. Andreessen co-founded Netscape to commercialize Mosaic, and Microsoft launched its competing Internet Explorer browser. Jerry Yang and David Filo co-founded Yahoo! as the first internet guide, and Jeff Bezos started Amazon.com. The first banner ad on the web was for Zima on Hotwired.com.

By 1995, the world had indelibly shifted. “The Year of the Internet,” Newsweek declared in its end-of-year issue. “Can you recall a day when there wasn't some gee-whiz Internet story in the newspapers?” Newsweek’s Steven Levy wrote. “Was there ever a time when surfing was performed in a bathing suit, outdoors?” In 1995, Sun launched Java, a simple way to enliven web pages with pictures and simple animation like dancing GIFs.

Web surfing from home could still be a frustrating affair, because most home connections relied on dial-up modems over copper phone lines. It could take hours to download a color photo.

Web surfing from home could still be a frustrating affair, because most home connections relied on dial-up modems over copper phone lines. It could take hours to download a color photo. But once past the last mile, all that data, whether an image, a song, a game, or a video clip, strained the fiber trunk lines that were the internet’s backbone.

Throughout the 1990s, scientists around the globe continued to find ways to increase the capacity of fiber. Corning unveiled a new, more efficient “dispersion-shifted fiber” that allowed for greater bandwidth over longer distances. Neal Bergano at Bell Labs sent 5 gigabits per second through 5,600 miles of fiber using optical amplifiers that, in 1996, would be used in the fiber laid below both the Atlantic and Pacific Oceans.  Around that same time, AT&T began deploying wave-division multiplexing (WDM) – a means for transmitting different wavelengths of light simultaneously to increase capacity and send data more efficiently. By 1996, Fujitsu, NTT Labs, and Bell Labs began experimenting with fiber that could transmit one terabit per second.

The more bandwidth was built, the more ways innovators found to use it. Adobe Flash brought graphics and video to the web in 1996. In the late-90s, Nokia released the Nokia 9000 Communicator, the first cellphone that could access the Internet, and Reed Hastings and Marc Randolph founded Netflix, which in time would stream movies over the internet. Google launched its search engine, and deregulation in India sparked that country’s software outsourcing services, shipping code back and forth to the U.S. Napster introduced peer-to-peer file sharing of music, the Finnish company Benefo introduced the first phone with GPS (Global Satellite Positioning), and MIT researcher Kevin Ashton coined the term “Internet of Things” to describe the wide array of small devices that eventually would communicate via the internet.

There would be more breakthroughs in optical fiber to keep pace. Today, fiber can transmit more than a hundred different colors of light, or wavelengths, simultaneously, greatly expanding the capacity of each strand. The submarine cable laid across the Atlantic in 2015 was 20 times faster than the fiber laid two decades earlier.

Just as an expanding network of fiber enabled the growth of the web in the 1990s, fiber still serves as the backbone for innovation on the internet.

View the next installment in the History of Optical Fiber: Mobile Changes Life And Work

The COVID-19 crisis and a new era of connection →