Celebrating A History Of Transformative Collaboration and Discovery

At Corning, for nearly 170 years, we’ve innovated relentlessly, tackling the problems and needs of our customers with life-changing discoveries. Our laser-like focus on research and development means gathering the top minds in science and technology, then reaching across departments, technologies, disciplines, and even companies, to take on new challenges with each generation. None of our advancements happens in isolation; each scientist stands on the shoulders of our past inventors to move our technology and our culture forward.

From developing glass encasements for Thomas Edison’s electric light in 1879, to creating window glass for every manned American spacecraft, to the development of durable Corning® Gorilla® Glass for mobile devices — creativity and invention have literally taken us to the stars. 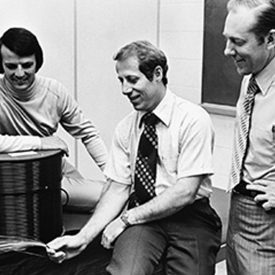 In 1970, a prime example of a transformative collaboration occurred when Corning brought together three scientists, Drs. Robert Maurer, Donald Keck, and Peter Schultz, to develop a low-loss optical glass that could effectively transmit light signals over long distances, with minimal degradation. Their discovery would revolutionize global telecommunications and usher in the information age, with our unprecedented rapid delivery of voice, data, video, and streaming.

30 years later, Drs. Maurer, Keck, and Schultz were awarded the National Medal of Technology for their life-changing innovation. The highest honor granted by the President of the United States to our leading inventors, the award recognizes those who have made lasting contributions to American life. Corning scientists have received this prestigious award four times, an acknowledgement of our continued dedication to discovery.

More recently, Corning collaborated with Merck and Pfizer to enable the modernization of pharmaceutical glass packaging by developing Valor® Glass. This transformative technology can help to address the challenges facing the pharmaceutical industry.

Pharmaceutical manufacturers spend hundreds of millions of dollars each year to improve overall packaging quality, yet they have been subject to glass packaging cracks, breakage, and particulate generation on high-speed filling lines for the past decade. These issues can compromise drug sterility and can lead to time consuming incident investigations and drug recalls that can keep essential medicines from reaching patients around the world.

But Corning loves solving tough problems, so our scientists set out to design a better glass package specifically for the pharmaceutical industry that addresses the challenges of protecting drugs, helping to ensure glass quality and improving manufacturing. Valor Glass is the first and only fundamentally new glass composition to be approved by the FDA as the packaging for a marketed drug product since the advent of borosilicate glass more than 100 years ago. The new robust composition, low coefficient external coating, and chemically durable drug contact surface makes this revolutionary technology ideally suited for sterile, injectable medicines. Equally exciting for pharmaceutical manufacturers, Valor Glass improves efficiency and throughput on filling lines lowering overall operational costs. We can’t wait to see how Valor technology transforms the pharmaceutical packaging industry.

Through unique collaborations and rigorous thinking, Corning continues to improve upon existing technologies, and discover new ones, to meet tomorrow’s challenges and advance the way we live and work.

This year, we celebrate the 50th anniversary of the invention of low-loss optical fiber — an innovation that has transformed the way we connect and that lies at the cornerstone of our communications revolution.

Leading The Way To New Discoveries

Many modern technologies have been made possible by Corning’s invention of low-loss fiber optics –including wireless networks, smartphones, TV, and automotive.

Corning’s history of innovation and collaboration across disciplines has led to new advancements to existing products to meet evolving industry demands as well as altogether new endeavors and technologies.