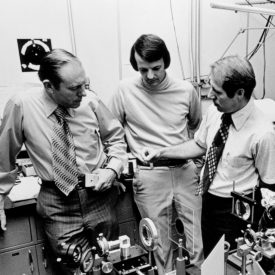 The world in 1970 teetered on the edge of a data and communications explosion.

New inventions were beginning to create a need to move data over long distances. In the fall of 1969, the U.S. Defense Department turned on ARPAnet, the internet precursor that linked the Pentagon with university labs. Companies such as Digital Equipment were building the first refrigerator-sized minicomputers, smaller and cheaper than room-sized mainframes, and that meant more companies could use data to run their businesses. The first ATMs, still so primitive that the paper receipts were slightly radioactive to make them readable, needed to be connected to send around consumer banking information. In another year, a computer programmer named Ray Tomlinson would send the world’s first email, initiating the @ sign used to separate a name from the user’s address.

Global businesses needed to talk to each other at a time when copper phone cables could carry a limited volume of calls. The sound quality was tinny because the lines couldn’t carry enough information to fully recreate a person’s voice.  Demand so greatly outpaced supply that an international call could cost $4 a minute ($27 a minute in 2020 dollars) or more.

There was a growing need to transmit enormous amounts of data and conversations over long distances at low costs. Researchers at the time had a theory about what might work, thanks to Charles Kao, a physicist at Standard Telecommunication Laboratories, a research facility in England.

The term “fiber optics” had been coined in the 1960s. But originally the term was applied to light intensifiers used in cathode ray tubes (for watching TV), computer circuitry, and medical equipment. The technology worked only when light needed to travel a short distance. After about 20 meters (around 65 feet), the signal dissipated almost entirely.

Kao was the first to see a world connected by light, with optical fiber as its medium. In a seminal paper published in 1966, Kao wrote that, in theory, fiber was potentially far superior to copper cable or radio signals. The problem was the impurities in glass, which caused the signal loss scientists call “attenuation.” The challenge was finding a “low-loss fiber” – glass that could carry light for long distances without an appreciable loss of light. Kao hypothesized that by purifying the glass, thin strands of fiber would be capable of carrying huge amounts of data over long distances with minimal signal loss.

But no one yet knew how to make such purified fiber. The British Post Office, which was also responsible for the United Kingdom’s telephone system, approached Corning for help in finding new kinds of high-volume data lines. Corning assigned a physicist on staff, Robert Maurer, to head a team that included two young researchers new to the company: Donald Keck, an experimental physicist, and Peter Schultz, a glass chemist.

The path to innovation, however, is invariably a frustrating one, marked by missteps and failed experiments. That led to countless combinations of glass, as well as experiments with different design dimensions and production methods for creating and purifying the compositions with which they were experimenting. Among the challenges the team faced was combining the two glasses into a single fiber. For each test, workers would need to pull strands from glass blocks that were set side-by-side in a furnace, and then encase one inside another to create a single fiber.

Bending over his microscope, he was astonished by a bright pinpoint of light. Later, Keck described it as “the most glorious thing I think I’ve ever seen.”

The team had fabricated yet another new variety of fiber and, late on a Friday afternoon in August of 1970, Keck inserted this latest sample into the team's equipment for testing. Keck was eager to start his weekend but wanted to measure this latest attempt before going home.  Bending over his microscope, he was astonished by a bright pinpoint of light. Later, Keck described it as “the most glorious thing I think I've ever seen.” Light loss is measured in decibels. Dr. Kao had said for his idea to work, the light-carrying ability of a glass needed to exhibit a light loss of fewer than 20 dB. The light pulsing through this new fiber measured between 16 and 17 dB. It was as if, Keck said, he could “just about feel the spirit of Edison in the lab.” In his notebook that day, Keck wrote the word “Whoopee!”

“Optical Waveguide Fibers,” as its inventors described it in their patent application, was a fiber capable of carrying 65,000 times more information than copper wire. Another four years passed before that “Whoopee” moment in the summer of 1970 would be immortalized by U.S. patent # 3,711,262.

It would be another nine years before Corning began mass-producing optical fiber. Several more years passed before companies began using it to lay optical cable under the ocean, connecting continents and providing a way for people to communicate at lower cost.

But that August afternoon in 1970 marked the start of a telecommunications revolution that in time would help remake the world.

View the next installment in the History of Optical Fiber: Fiber Gets Real