A New Era In Voice Calls

A New Era In Voice Calls 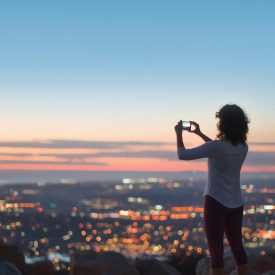 Until 1982, voice phone calls were a utility, like electricity or water. Call quality was poor, choices of services were few, and a long-distance phone call cost so much that many consumers considered it a luxury.

That all changed in 1982, as optical fiber lines began to turn a scarcity of communication bandwidth into abundance, reinventing the economics of voice calls and reordering the telecommunications industry.

MCI, with some help from Corning, was key to driving that change.

At the dawn of the 1980s, local telephone networks built with copper wires were connected to other cities and regions by microwave radio signals and satellites. MCI, originally called Microwave Communications, Inc., at first built a business carrying calls and data on microwave (in the 1960s) and then started experimenting with satellite technology (in the 1970s).

In 1982, AT&T signed a consent decree. Under the agreement, AT&T would retain its long-distance operations, and its research and manufacturing divisions but divest itself of its local telephone systems.  The plan created seven independent regional companies, dubbed the “Baby Bells,” that were free to bundle their long-distance service with any provider, including MCI as they sought to reduce their long-distance line access fees.

MCI’s plan began with a meeting in the fall of 1982 at the company’s headquarters in Washington, D.C. MCI met with representatives from both Corning and Siecor, a joint venture between Siemens Telecom and Corning, that would combine Corning’s glass fibers into long-haul optical cables. MCI sought to purchase 60,000 miles of single-mode fiber to construct its terrestrial long-haul optical cable network, intending to replace its microwave and satellite-based network. The request was orders of magnitude larger than any previous order, and MCI wanted delivery within 12 months.

The MCI order triggered an around-the-clock effort to refine a process for mass-producing single-mode fiber. One decision by Corning had proved prescient: A few years earlier, the company had established an optical fiber manufacturing facility within an existing plant in Wilmington, North Carolina, despite no sizable orders for a speculative new technology. When MCI’s massive order came in, the North Carolina facility capabilities were expanded in order to also enable the full-scale production of single-mode fiber and, in the fall of 1983, Corning and Siecor delivered their first large shipments of cabled single-mode optical fiber to MCI.

Exploding competition would create an enormous appetite for new network capacity – just as optical fiber with its higher capacity and lower cost per bit made it possible for telecom newcomers to compete more effectively.

MCI had leased the right-of-way from Amtrak to lay its optical fiber network between New York and Washington, DC.  Each fiber in these early stage long-haul network cables could reliably carry 400 megabits per second. With its new network, MCI could handle 40,000 calls – four times the maximum capacity of the microwave network it replaced. MCI subsequently launched MCI Mail, one of the world’s first email services, by leveraging the newly established capacity.

Exploding competition would create an enormous appetite for new network capacity – just as optical fiber with its higher capacity and lower cost per bit made it possible for telecom newcomers to compete more effectively. AT&T followed MCI’s lead and established five major optical routes throughout the U.S. Corning would gain another huge customer when two other challengers in the long-distance market, GTE and United Technologies, joined forces to create a new company called Sprint. Orders were also coming in from phone companies in Europe and Japan. The fiber race was on.

Transcontinental calls that had cost multiple dollars per minute would soon instead cost pennies-per-minute.

All that new bandwidth opened the way for many new methods of communication. In 1986, Motorola unveiled the world’s first cellphone. Called the DynaTAC 800z, it cost $4,000 and was roughly the size of a sub sandwich, yet it initiated an eventual mobile phone boom. In the 1980s, the nascent internet began connecting universities and research labs. By 1987, the number of hosts on the internet surpassed 20,000. Cisco would ship its first router that year. The world was poised for an information revolution.

View the next installment in the History of Optical Fiber: The Dot-Com Data Explosion