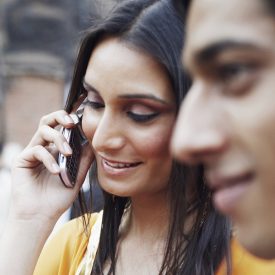 Inventing a new way to transmit phone calls and data is one thing. Making it work in the real world so the technology makes an impact on people’s lives can be even more challenging. Three Corning scientists behind the company’s invention of optical fiber in 1970 still had several more years of work to do.

After a recession in the mid-1970s, the world economy grew vigorously in 1977 and 1978. Exploding global industries were hungry for communication – as was the U.S. government, which was facing down military and ideological threats from the Soviet Union.

The U.S. government was the first to build a fiber-optic line: in 1975, it used fiber to link the computers at its North American Aerospace Defense Command (NORAD) center at Cheyenne Mountain. In 1977, the first optical telephone communication system was installed by AT&T below downtown Chicago. Each fiber carried the equivalent of 672 voice channels. In Japan, the Ministry of International Trade and Industry built an experimental fiber-to-the-home demonstration. Companies were starting to imagine what high-bandwidth transmission might lead to. Corning scientists were just beginning to ponder the possibilities of fiber.

AT&T and the British Post Office, which was in charge of the U.K.’s telecommunication network, believed that an optical fiber cable connecting North America and Europe would lay the foundation for a global network and usher in a modern information society. The two entities, along with Standard Telephones and Cables Ltd., a London-based equipment maker, announced they would develop a single-mode submarine optical fiber cable to lay along the seabed of the Atlantic Ocean.

While it became evident that demand for bandwidth would grow rapidly, progress in commercializing fiber took time. Making a few strands of fiber long enough to stretch across two laboratories at Corning is hardly the same as mass-producing reels of fiber for customers. Researchers spent much of the 1970s refining the production process, trying different methods for drawing (pulling) fiber, and experimenting with materials and various refractive index profiles.

“We looked at it as supplying the demand of the future in terms of what existed at that time,” said Maurer. “I didn't know of anybody who foresaw anything like what was coming.”

Researchers from Corning and AT&T's Bell Labs made a key breakthrough in 1972 when they developed single-mode fiber with a smaller optical core that was much more effective for long-distance transmission. Meanwhile, physicist Robert Maurer, Donald Keck, an experimental physicist, and Peter Schultz, a glass chemist, aided by a number of other researchers and technicians at Corning, were building on the foundation they set with the invention of low-loss optical fiber. In 1972, the Corning team created a glass that performed appreciably better than the breakthrough glass they developed in 1970. The new Germania-doped silica glass didn't need to be heat- or acid-treated to deliver excellent results.

Ten years passed before the AT&T-led group laid optical fiber cable across the Atlantic Ocean. Once switched on, in 1988, an AT&T cable could handle 40,000 voice calls simultaneously rather than its previous maximum of 4,000. The price of a phone call between Europe and the United States dropped. A new era of global communications was upon us.

Yet at that point, communication mostly meant phone calls and facsimile (fax) machine images. Picture phones were about the most interesting thing anyone was imagining. The world was still far from innovations ranging from AOL to the web, to streaming music and movies. “We looked at it as supplying the demand of the future in terms of what existed at that time,” said Maurer. “I didn't know of anybody who foresaw anything like what was coming.”

View the next installment in the History of Optical Fiber: A New Era In Voice Calls