Seamlessly Connect to the World

Corning’s invention of the first low-loss optical fiber, over 50 years ago, ignited the critical spark that began a communications revolution and forever changed the world. Today, there are more than 5 billion kilometers of fiber installed around the globe, and Corning continues to lead the industry in product quality and innovation.

Corning’s invention of the first low-loss optical fiber, over 50 years ago, ignited the critical spark that began a communications revolution and forever changed the world. Today, there are more than 5 billion kilometers of fiber installed around the globe, and Corning continues to lead the industry in product quality and innovation.

At the Center for Fiber Optic Testing (CFT), our product measurement engineers conduct the industry’s most rigorous specification tests to ensure Corning® optical fiber works for the intended application from the time it is first installed through its expected product lifetime. We test to ensure quality, fiber attenuation, dispersion, bandwidth, environmental tolerances, performance, stripping and splicing attributes, strength, fatigue, and much more.

Our leadership in optical fiber innovation is recognized globally; Corning was the first to develop a number of new fiber products that have moved the industry forward by enabling greater service capacity and capability.

The measurements developed at CFT are reproduced at our optical fiber manufacturing facilities. We have the ability to trace every strand of fiber produced, and we are able to identify where and when it was manufactured, whether it is still on the spool or was sold years ago. In fact, customers report that trial cables installed in the late 1970s and early 1980s are still in use. Additionally, there is considerable proof that optical cables recovered from the field years after installation still meet the specifications against which they were installed. This is a testament to the rigor and integrity of CFT’s testing processes. 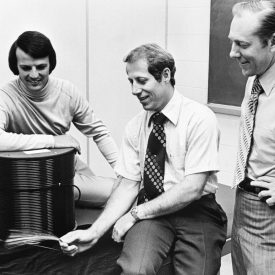 Three of our Scientists Invented the World’s First Low-Loss Fiber for Communications – and Changed the World.

Today, we take for granted our “connectivity” – that is, our ability to seamlessly connect to the world and access information on virtually any subject, at any time, in nearly any place. But in 1970, when Corning Incorporated scientists Drs. Robert Maurer, Donald Keck, and Peter Schultz invented the first low-loss optical fiber, they could not have foreseen how dramatically it would revolutionize the telecommunications industry. Their breakthrough discovery paved the way for the commercialization of optical fiber communication by transmitting 17 decibels of light per kilometer of fiber. Today, that number is 0.17 dB/km for Corning’s suite of ultra-low loss fibers – 100 times better performance than the first low-loss fiber.

The evolution of fiber over the past 50 years is a story unlike any other, and we have been at the forefront of every major innovation in this revolutionary transmission medium’s journey. It all started in the mid-1960s, when it became clear to Corning researchers, and to the communications industry as a whole, that the existing copper wire infrastructure used to transfer data and voice would not have enough bandwidth for the impending increase in traffic.

A new solution was needed, and we believed that optical fiber was the key. Backed by the company's investment of “patient money,” Drs. Maurer, Keck, and Schultz employed innovative problem-solving strategies and outsmarted the competition in the race to develop the first low-loss optical fiber. After four years of trial and error, experimentation, and learning, they unveiled a unique manufacturing process for an ultra-pure, hair-thin glass fiber that transmitted light signals with low attenuation, also known as signal loss.

The story did not end there. An amazing, unplanned confluence of technological breakthroughs in the early 1970s fueled the rapid acceptance of optical fiber – the semiconductor laser, the microprocessor, and the initial “vision” of a global communications network. In the early 1980s, optical fiber was being installed primarily by telephone companies. Ten years later, the fiber revolution was substantially reshaping the way the world communicated. All the while, we continued to create and improve manufacturing processes, design long-haul technology, and enhance and modify our optical fiber as this dynamic industry matured.

Once the internet gained acceptance, the demand for bandwidth capable of transmitting voice, data, and video at high speeds exploded. As a result, the never-ending pursuit of faster, better, and more cost-effective communication required researchers to continually improve capacity and connectivity on a global scale. For more than 50 years, our legacy as the world leader in optical fiber has continued to set the industry standards and has remained at the forefront of technological breakthroughs.