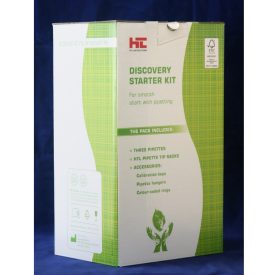 The HTL three- pipettor starter kit in its new packaging, which uses about 48 percent less cardboard than the previous design.

The Life Sciences plant team in Warsaw, Poland, took “scissors” to some of their product packaging, reducing the cardboard used by up to 48 percent.

The project, named “Scissors,” started in 2017 with the goal of redesigning the packaging of two labware kits produced at the plant. The project was a follow-up to a 2014 package redesign that decreased the cardboard used for another product’s packaging by 10 percent.

“We investigated ways to use less cardboard in our packaging for environmental and cost benefits,” explained Agnieszka Topolewska, assistant product line manager and project lead.

Topolewska added that in designing packaging using less cardboard, the plant sought to maintain or meet various certifications and requirements, including ISO 14001 (International Organization for Standardization certification for Envoironmental Management).

After investigating packaging improvement options, developing the new design, and testing shipping capabilities, the change was approved in August 2017. The first of the kits using the new packaging left the plant that October.

Topolewska said the redesign is using about 24 percent less cardboard for the larger labware kit, and about 48 percent less for the smaller kit.

For this effort, the plant received a Corporate Environmental Control Award during Corning’s regional Environmental, Health, and Safety Conference earlier this year.

“This project has so many benefits, and the team deserves to be recognized,” said John Novotny, director, Corporate Environmental Control. “By using less cardboard, we’re not only helping the environment and saving costs, we’re also promoting waste reduction down our supply chain to our customers.”