The Intersection of Art and Science: Q&A With Dr. Joseph Regan

People often talk about art and science as if they're at odds, but are they?

Joseph Regan, Ph.D., doesn't think so. A biologist and artist himself—the Corning customer who collaborated with the company on their limited edition poster series—Dr. Regan says creativity informs his work in the lab and vice versa. Whether he's studying complex 3D organoids or making cell images pop with color for a journal cover, the collision of both art and science is what he finds most inspiring.

"Prior to the invention of the camera, biologists were trained artists and relied on pencil, brush, and paper to catalogue and study the natural world," he said. "These pursuits generated exquisite works of art that were shared widely with the public through exhibitions and book publications, such as the 17th Century illustrations of Maria Sibylla Merian, who became known as 'the woman who made science beautiful.'"

Just getting started in 3D cell culture? Ready to move to more advanced 3D models and systems? Focusing on organoids? Answer yes to any of these questions and we’ve got a 3D Cell Culture ebook for you.

Now that modern-day technologies can digitize those depictions, it has ushered in a new generation of artist-scientists, Dr. Regan among them. His work focuses on images rendered from immunofluorescence confocal microscopy, a color-rich approach to showcasing the building blocks of life. In particular, Dr. Regan's prints portraying organoids grown in Corning® Matrigel® matrix were featured in a sci-art exhibition and became the theme of Corning's "art and science" organoid poster series.

With his work known and published worldwide, we asked Dr. Regan about his process, his interests, and what he wants scientists to know about the interplays between art, science, and life:

How did you begin working with organoids—and what do you find most fascinating about them?

The first time I worked with organoids was during my Ph.D. at the Institute of Cancer Research in London. I was researching cell lineage hierarchies and the mechanisms that regulate stem cell self-renewal and differentiation during mammary gland development and cancer. This involved using a combination of cell type-specific cell surface markers and fluorescence-activated cell sorting (FACS) for the prospective isolation and functional characterization of different cell types.

By seeding single cells into Matrigel matrix and observing their growth and morphology as organoids, I was able to determine phenotypic differences between the isolated cell types. The organoids faithfully recapitulated the behavior of the cells in vivo and formed multi-lineage "mini-mammary glands" that were even capable of producing milk.

Observing them down the microscope for the first time and being cognizant of their enormous potential to advance our understanding of human biology, and also their use as models to translate that knowledge into therapies, was a truly amazing and inspiring thing to see and still is today!

What do you enjoy about this form of scientific art—and what made you decide to do it professionally?

As a biologist, one is trained to take representative pictures of what is being studied but there is also an artistic impulse to make these images as aesthetic as possible and, certainly in my case, one often gets lost "through the looking-glass" and takes many more pictures than necessary for the simple joy of being able to witness and create something beautiful.

As a result, I've spent thousands of hours gazing through microscopes and created innumerable immunofluorescence micrographs, but only a handful of these images end up being used for publication in scientific journals. And these are, for the most part, only seen by other scientists working in the same field.

The idea of sharing these images with a wider audience was, therefore, always in the back of my mind so it was pretty serendipitous when an art gallery in Berlin approached me about having an exhibition exploring the interconnectedness of art and science, and also when the idea for the poster series came from Corning Life Sciences.

"It's also been amazing to receive positive feedback and inspiring messages about the posters from colleagues and scientists all over the world. I'm especially proud of the concept that Corning came up with for this year’s poster, which was to acknowledge the innovation and incredible hard work that scientists have done over the past year to get us through the pandemic and create a vaccine to end it."

How do you think art and science can influence each other?

I think that learning how to be creative in art helps creativity in science and vice versa. Also, intuition plays a major role in recognizing scientific problems and creating novel ideas to solve them. And generally, having broad interests and experiences, also outside of art and science, and being able to make novel cognitive connections between them is hugely helpful in generating new ideas and problem-solving.

What methods do you use to make your art?

The images are created using an immunofluorescence staining method that I developed over years of working with organoids in Matrigel culture. The organoids are fixed in formaldehyde and then permeabilized with a chemical called Triton-X 100. They're then processed through several incubation steps with primary and secondary immunofluorescent antibodies and a dye to label DNA prior to mounting on microscope slides for visualization with a confocal laser scanning microscope.

What manipulations do you make to the images to get them to look so stunning?

The morphology of the organoids in the images has not been altered. The different colors comes from staining molecular components within the cells with antibodies that produce a fluorescent signal when excited by lasers at different wavelengths on the visual spectrum and imaged with a confocal microscope.

For scientific purposes, the colors used are usually those that produce the most contrast so that differences can be clearly observed. But for my art, I alter the colors and put the image files through a post-production process. Although the original colors may be different, the images on the posters are a pretty close representation of how the organoids actually look when viewed through a confocal microscope (minus the glow from the background laser light). 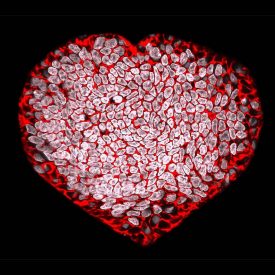 Did you keep prints of these posters?

Absolutely! I have them framed in my office. I love how they turned out. Corning did a wonderful job putting them together and presenting my work and the message behind it: "Imagination of the heart and soul of science."

It's also been amazing to receive positive feedback and inspiring messages about the posters from colleagues and scientists all over the world. I'm especially proud of the concept that Corning came up with for this year’s poster, which was to acknowledge the innovation and incredible hard work that scientists have done over the past year to get us through the pandemic and create a vaccine to end it.

What do you want the scientific community to take away from these images?

The road to scientific discovery can be long and paved with failure. Along the way, as scientists, we can get lost in the routine technical minutiae of our work and it can sometimes feel like the imagination and creativity required for scientific innovation and discovery are forgotten.

In Albert Einstein's words, 'The greatest scientists are artists as well.' I hope that my images and the poster series from Corning help remind scientists that their creativity is acknowledged and that they are artists too!