Copenhagen University Hospital researchers turn to Corning for help scaling up ex vivo expansion of adipose stem cells to test the effect and reliability of a new procedure for breast reconstruction. 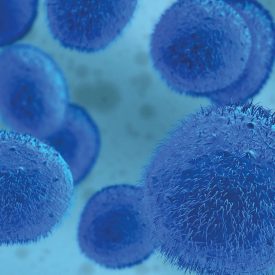 Autologous fat grafting is the least invasive method for breast reconstruction, but also has major drawbacks, including high tissue resorption rates of up to 80%. Researchers in Denmark, led by Prof. Krzysztof Drzewiecki, Department of Plastic and Reconstructive Surgery and Dr. Anne Fischer-Nielsen, Department of Clinical Immunology, Rigshospitalet, had a hypothesis: what if you could enrich the human fat graft with autologous adipose stem cells (ASCs) to increase graft survival? But they faced a major obstacle: how do you culture a sufficient volume of stem cells to increase grafting success? Dr. Peter Glovinski, leader of the present clinical study, turned to Corning, who designed a scale-up solution that’s enabling them to grow the billions of stem cells required to move forward with this clinical study.

Too Many in Need, No Ideal Solution

Dr. Glovinski and his colleagues are passionate about their work for one simple reason: “One in ten women worldwide will face breast cancer sometime in their life and many will have the need for reconstructive surgery which is part of the cancer treatment, including many of the 4,800 women, who each year in Denmark alone are struck by breast cancer. Yet current surgical procedures, such as free flaps and implants, have major drawbacks,” he says.

"We chose Corning for their broad cell culture product line, which gives us everything we need for scale-up. But we had no idea of the expertise that came with the products!"

There is another common procedure that’s less invasive, but still has significant shortcomings: autologous fat grafts in which fat tissue is removed from the patient’s thighs, belly, and buttocks by liposuction, processed into tissue suspension, then injected to recreate the breast. As Dr. Glovinski emphasizes, “Up to 80 percent of the injected fat can be resorbed by the body, and a lot of tissue can die. Often women need the procedure redone several times.”

But what if, the team posed, fat graft tissue could be enriched with ex vivo expanded autologous adipose-derived stem cells to increase graft viability? “We know that stem cells secrete growth factors and differentiate into mature fat cells, which may help graft survival,” explains Dr. Glovinski, who brings a rare combination of cell culture research expertise and clinical experience to the project. 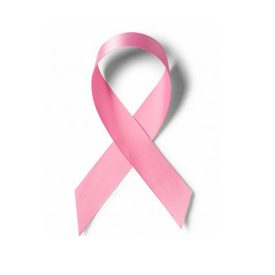 In 2013, with co-sponsorship from the Danish Cancer Society, Centre of Head and Orthopaedics Rigshospitalet, and Moalem Weitemeyer Bendtsen, they initiated a triple-blind, placebo-controlled trial to compare the survival of enriched with non-enriched fat grafts. The results, published in The Lancet (Kølle, et al., 2013) were promising, indicating that ASC graft enrichment could render liposuction a reliable alternative to major tissue augmentation1. “That first clinical trial, in which enriched fat grafts were injected into the upper arms, was important as a proof of concept,” notes Dr. Glovinski.

The team has now moved ahead with a year-long clinical study that will ultimately involve female participants. The protocol involves harvesting stem cells from each woman via liposuction, then culturing the ASCs, similarly to their previous clinical study. Autologous fat grafts are then enriched with the stem cells before being injected into the breasts. The project has been registered, approved, and classified by the Danish National Health authorities as “Advanced Medical Therapy.” As Dr. Glovinski notes, “In turn, because the project was designated as advanced medical therapy, our application was also reviewed by the Danish National Scientific Committee, which, we were honored to learn, provided its approval.” 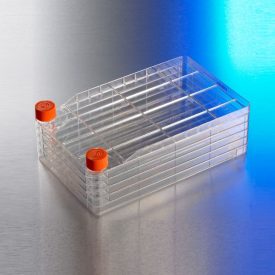 More Than 600 Million Stem Cells from One Corning® CellSTACK® Chamber

By expanding the cells ex vivo, the team knew they could improve their physiological concentration significantly. However, as Dr. Glovinski says, "Our biggest challenge was to figure out the best way to scale-up."

The researchers contacted their local Corning representative in Copenhagen to help them devise a solution for their specific needs. "It was trial by error," says Caroline Hughes Jenkins, Corning Life Sciences. "We tested 25cm2 flasks with three surface types, tried Corning HYPERStack®-12 with Corning CellBIND® surface, then CellSTACK-10 coated with a Corning Tissue Culture (TC)-treated surface, which alters the surface charge of the culture vessel to improve cell attachment and growth. After a few minor adjustments, the combination of CellSTACK and TC-treated surface worked extremely well. The team is now getting more than 600 million stem cells from one CellSTACK-10 chamber."

Says Dr. Glovinski: "We chose Corning for their broad cell culture product line, which gives us everything we need for scale-up. But we had no idea of the expertise that came with the products! Caroline and her team visited our labs several times to help us find the best surface and culture vessel. They were exceptionally good at teaching us how to use the products, as well as troubleshooting when we weren't getting the yields we were anticipating."

At the completion of this trial, the researchers plan to initiate a third clinical trial – this time, with breast cancer patients. Says Dr. Glovinski: "This new technique may prove to be a game-changer in plastic surgery. Many women don't like the idea of implants or other types of invasive procedures. If they knew they could have a minimally invasive procedure using their own stem cells, we think many more women will choose reconstruction."

In conclusion, Caroline Hughes Jenkins says: “We’re proud to have helped the research team from Copenhagen, Denmark to overcome a significant obstacle to a discovery that has the potential to transform breast reconstruction worldwide. I am also incredibly proud of the Corning Life Sciences team. It was a true Corning team effort by all and a great example of customer collaboration at its best.”