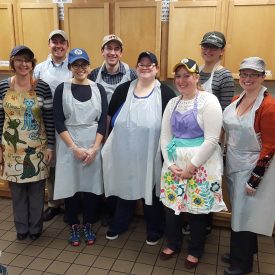 When new employees in the Corning Valley want to meet coworkers, volunteer in their community, and find employees' most popular places to eat and shop, the company's "starter" employee resource group (ERG) is ready to help.

The Corning Professionals Network (CPN), with more than 600 members in the region, and chapters in Hickory, N.C., and Reynosa, Mexico, puts out the welcome mat on new hires' first day, letting the newcomers – many of whom are new to the area – know that there are many places to go and things to do, and many friendly co-workers to meet.

"We are your starter ERG," said Deanna, CPN president. "If you are new, especially new in the Corning area, we can help you get acclimated."

Deanna joined Corning in June 2014 after graduating from Penn State University in State College, Pa. "I moved from a place where there were 40,000 people my age to a small city where I didn't know anyone," she said. "A co-worker told me about CPN and I joined right away. I met about 40 people at my first event, a miniature golf outing."

In addition to mini golf there are many other after-hours networking opportunities, including at sports events, bowling nights and cookouts tailored for families, happy hours, and an annual wine-tasting tour and a hiking trip.

Volunteering is equally important, according to members, who recently helped sort food at the Food Bank of the Southern Tier in Elmira, and spruce up the Chemung County Humane Society and SPCA, near Elmira.

"I think it helps new employees establish a sense of belonging in their community," said Jeremy, CPN vice president. Jeremy arrived in Corning in late 2013 from Portville, N.Y., near Olean, and a CPN holiday party welcomed him to the area. 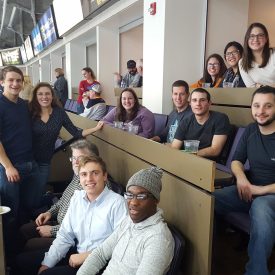 Now CPN is organizing its first global volunteering event, possibly during a week in June, with its two chapters. The members will spend one day volunteering in their communities, Deanna said. More information will be announced soon, and all employees will be invited to participate.

CPN was one of the key resources that helped Christina successfully move from Cazenovia, N.Y., near Syracuse, to Corning in February 2016. "Moving to a new region and knowing few people can be difficult, but CPN helped to smooth the transition through its many sponsored and recommended events."

Christina said volunteering is just as important as networking opportunities. "The volunteering events helped me establish connections throughout the region, especially increasing my involvement in the Corning community. They have transformed Corning from just a city to work in to a community to live in."

Umid joined Corning last September, moving from Arkadelphia, Ark. He said CPN keeps members up to date about events. "It has been a good way to meet people in other parts of the company that I would usually not encounter," he said. "I have met some great people."

Chris lived in Potsdam, N.Y. for four years to attend Clarkson University before joining Corning last fall. "As a new resident, it's been very helpful to ask other members for advice about the Corning area. It's also been a great way to meet other people my age and learn more about the company."

CPN leadership surveyed all employees in the Diversity Network last year to learn their local favorites, everything from restaurants, wineries, and home improvement and grocery stores to automobile repair shops and medical doctors and dentists. A spreadsheet was compiled with the results for the newcomers, Deanna said.

"The survey results help new employees learn about their options," she said. "It's been a popular resource."

CPN events are planned so new employees of all ages, including those with families, feel welcome. "I like that we try to appeal to everyone," Deanna said. "We want spouses and children to join us for family-oriented events."

Amanda was hired last July after graduating from Rutgers University in New Jersey. She joined CPN at her supervisor's recommendation. "Sometimes networking when you're just starting out can be difficult, but this group is fun and seamlessly incorporates personal and professional networking in its events so everyone benefits. It is an excellent way to make connections and friendships."