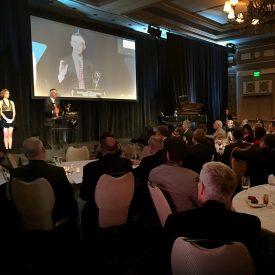 Smart touch devices, rich streaming media with lifelike images, and instant connections everywhere we go – these are all part of the experiences made possible by optical fiber in today’s world.

And because optical fiber has revolutionized broadcast technology and the way people watch TV, the National Academy of Television Arts & Sciences presented Corning Incorporated with a Technology & Engineering Emmy® award.

John Igel, vice president and general manager of Optical Fiber and Cable at the time, accepted the Emmy in Las Vegas in January 2017.

Optical fiber was born in Corning labs in 1970 and its invention has become one of the company’s most familiar success stories.

Network carriers in the mid-1960s were in trouble because the growing volume of information was straining their copper lines.

In response to the challenge, Corning launched a highly speculative project: Using strands of pure silica to transport light without losing signal strength along the way.

They manipulated the composition to prevent light from escaping. And one memorable day in the lab, it worked.

“It’s redefining not only how we consume entertainment,
but also how we work, drive, stay healthy, and learn.” 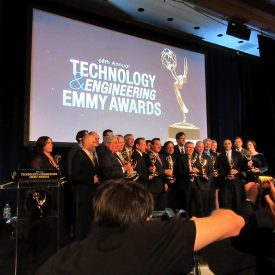 The invention – which earned the scientists a National Medal of Technology in 2000 – unleashed a communications revolution, with data traveling at the speed of light.

“One optical fiber link offers enough bandwidth to stream two million high-definition videos at the same time,” Igel told the crowd at the Emmy awards ceremony. “4K TVs are a reality already and 8K is coming shortly … no problem for fiber!”

And as mobile devices protected by Corning® Gorilla® Glass made it practical to take displays anywhere, massive optical networks have made it possible to break TV viewing outside of four walls.

Today, about three billion kilometers of optical fiber are deployed around the world.

“It’s redefining not only how we consume entertainment, but also how we work, drive, stay healthy, and learn,” said Igel.

“It combines with so many of our other glass innovations to enable what we at Corning call The Glass Age – and we are proud to be its pioneer.”