How Glass Scientists Took on the Challenge of Harnessing Light 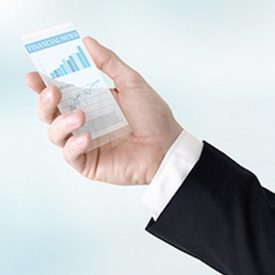 The information we sort through on our electronic devices each day seems to come out of nowhere. Just as we turn on a faucet and expect to get water, we assume the bandwidth is there to support our online communications demands.

But it’s the powerful, always-on capability of global optical fiber networks – enabled by more than two billion kilometers of thin glass strands– that ensure that we can post, chat, download, and transact with ease.

How did glass become the medium that harnessed light and transformed modern communications? 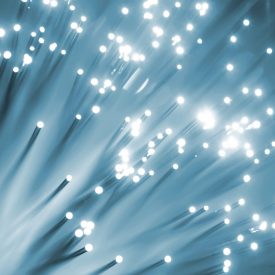 To meet their goals, Post Office officials  weren’t looking for any modest fiber improvements. They would need an unheard-of 98% reduction in signal attenuation from other glass fibers available at the time.

Corning formed a small multi-disciplinary team of Ph.Ds to take on the daunting task: physicist Robert Maurer, chemist Peter Schultz, and engineer Don Keck. Maurer led and coordinated the effort. Schultz was in charge of glass composition. And Keck was in charge of actually measuring the light transmission and attenuation.

As with all experiments, there were many trials, many setbacks, and many late nights in the lab.

One of the biggest challenges was finding the right glass encasement, or cladding, for the fiber. Essential because its low refractive index confines light to the core of the fiber, the cladding needed to be thin, flexible, and inch-for-inch stronger than steel.

The team had an idea that if they could capture some of the soot generated by the high-temperature fiber manufacturing process, they could also nab a necessary additive called dopant.

Using an unlikely tool – an old vacuum cleaner – the scientists drew the soot out of the flame into the cladding tube, and it deposited on the inside wall. After intense heating, the soot would fuse to the inside of the fiber, a process called sintering.

The team predicted that the process would solve the problem of scattering and losing light.

And in 1970, by doping the silica glass fiber with titanium, the inventors reached  a breakthrough.  They developed an optical fiber with attenuation of 17 decibels per kilometer – loss levels even lower than the 98%-reduction goal the British Post Office needed.

The innovation immediately established that optical communications could be practical.

And key milestones that followed the breakthrough firmly established glass optical fiber as the key enabler of the communications revolution: 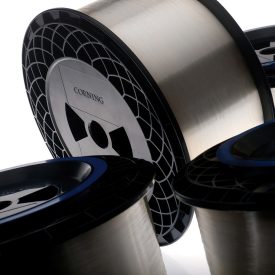 Today’s optical fiber has dramatically improved in performance since its early days in the lab. Contemporary fibers have the ability to transmit the entire collection of the U.S. Library of Congress from Florida to London in under 25 seconds. It’s also three times stronger than steel, more durable than copper, and light and flexible.

With its unmatched speed and capacity, optical fiber is certain to remain at the heart of networks that are smoothly connecting growing data traffic around the world.

When three Corning inventors developed the first low-loss optical fiber in 1970, they couldn’t imagine the communications revolution they were igniting. Upon the 45th anniversary of their discovery, it is clear that their work ultimately enabled people around the world to connect with information, devices, and each other.

A short tutorial detailing the basics of optical fiber, its composition, and its capabilities.

In today’s world of global telecommunications, optical fiber is the core of connectivity, providing the medium through which networks instantaneously transmit voice, data, and video along a strand of glass that is stronger than steel yet thinner than a human hair.