Corning Celebrates 45 Years on the Cutting Edge with Optical Fiber 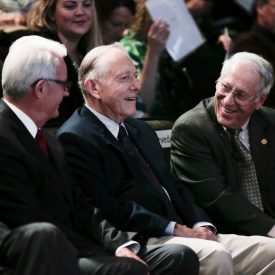 Inspiring talks reflect on the innovation’s past, future

When three Corning inventors developed the first low-loss optical fiber in 1970, they couldn’t imagine the communications revolution they were igniting. Upon the 45th anniversary of their discovery, it is clear that their work ultimately enabled people around the world to connect with information, devices, and each other.

To bring this achievement to life for the current innovators building on this legacy, Corning reunited Drs. Donald Keck, Robert Maurer, and Peter Schultz with its Science & Technology community. 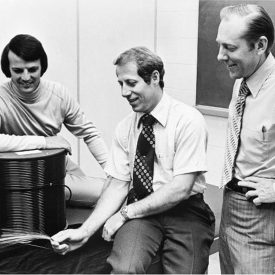 “This is not only a celebration of these three inventors,” John Igel, vice president and general manager, Corning Optical Fiber and Cable, said. “It is also a call-to-action for the inventors of today – those who will be inspired by what’s been accomplished just a mere 45 years into the mission.”

The inventors’ visit to Sullivan Park, the center of Corning’s R&D, was about Corning’s generations talking about the drive to discover. Presentations showcased the innovations that continue on the work that Keck, Maurer and Schultz began. Showing that – while they are in Inventors Hall of Fame, and they’ve just been immortalized at the Smithsonian – their work is historic, it is not history. It’s driving today and tomorrow.

The Inventors of Optical Fiber

Drs. Peter Schultz, Donald Keck, and Robert Maurer invented low-loss optical fiber in 1970 and recieved the National Medal of Technology for their innovation in 2000.

“Each Corning invention, no matter how life-changing, is a stepping stone to something greater – never a final resting place.” -John Igel, vice president and general manager, Corning Optical Fiber and Cable

Keck, Maurer, and Schultz participated in a panel discussion during their visit to Sullivan Park.

“Forty-five years after the initial breakthrough, fiber is still on the cutting edge of technology,” Clark Kinlin, executive vice president, Optical Communications, said. “From the Internet and cloud computing, to the ability to seamlessly make calls, send texts, and upload selfies, fiber is the backbone that connects businesses, homes, and people around the globe.”

Keck, Maurer, and Schultz engaged in a panel discussion on how this success came to be. They then talked individually with employees for several hours. They discussed their experience at Corning as well as innovations in the works today.

“In 1970, we were trying to get close to 10s of decibels of loss per kilometer,” John said. “Forty-five years later, we are working on projects whose success or failure rests on our ability to control a few 1/10,000ths of decibels per kilometer.”

“Corning has never been content,” he said. “The idea has always been, if you don’t invent, someone else will.”

Outlines the capabilities and evolution of Corning’s optical fiber technology starting in 1970. See the full infographic>