Sensing can take one of several technological forms, and can be used in many applications.

Today’s networks are more demanding than ever before—always on, always reliable, and with no downtime regardless of the application or environment. Instead of responding to issues once they occur, owners and operators are looking for ways to proactively manage their infrastructure. How can issues be detected and addressed before they happen, so reliability is guaranteed and downtime is eliminated?

Imagine being able to continuously, accurately, and in real-time detect small acoustic, temperature, and/or strain changes anywhere along an optical cable in the outside plant environment. And depending on the interrogation unit or laser source used, you could have the ability to detect various environmental events at distances from ones to tens of kilometers away, with large numbers of distributed “virtual” sensors along the path. This is possible by using optical fiber as the intrinsic sensing medium.

So how does the technology work, what are the benefits, and what applications are possible? We’ll start with a brief history before an explanation of the various types of fiber sensor networks. 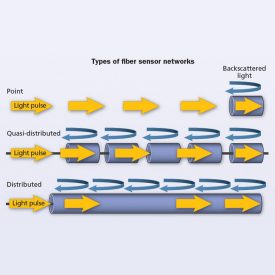 It has been more than 50 years since the first patent was filed that considered the use of fiber optics as a way to measure environmental events. U.S. Patent 03327584, granted in 1967, describes a fiber bundle that would simultaneously illuminate a surface and also capture the reflected light. In the early 1980s, fiber-optic acoustic systems for sensor arrays were used for lightweight wide aperture array (LWWAA) for Virginia Class submarines, towed arrays, and various surveillance systems.

The use of fiber-optic sensing for in-well/down-well monitoring in the oil and gas industry has been ongoing for the past 20 years. In the 2000s, distributed temperature sensing was used, followed by the use of distributed acoustic sensing in the 2010s. Although the technology is recognized as providing value in many instances, it is far from being deployed on every well. However, there is promise that fiber sensing will become standard in certain applications.

For the past decade, distributed fiber-optic sensing has been used to detect and prevent onshore oil and gas pipeline leaks. As an example, in 2016, OptaSense won a contract to supply a pipeline leak detection and security solution for the Trans-Anatolian Natural Gas Pipeline (TANAP). The solution will monitor more than 1850 kilometers of pipeline as well as perimeter security for all facilities. Currently there are more than 15,000 kilometers of pipeline being monitoring by fiber sensing technology around the world.

There are three types of fiber-sensing networks.

Point senor networks—In a point sensor network, each sensor is discrete and must be backhauled individually. Point sensors are usually used in shorter-length deployments. Understanding where the point sensors are along a given path is critical to being able to properly interpret data received from the environment.

Quasi-distributed sensor networks—One version of quasi-distributed sensing includes the use of several fiber Bragg gratings (FBG), which are embedded into the fiber. The refractive index of the fiber core is modified such that certain wavelengths of light pass through while others are reflected back toward the source. Each FBG can reflect a specific wavelength, making each one identifiable along the fiber pathway. In other words, FBGs are like inline wavelength filters that reflect specific wavelengths back to the source, and multiple FBGs can be employed into a single fiber path. As with point sensor networks, understanding where the FBGs are in relation to what is being detected is key to proper interpretation of the data.

Distributed sensor networks—In a distributed sensor network, the number of sensors along an optical fiber is distributed, and the numbers vary based on the length of the system, the spatial resolution of the sensors, and the interrogator box used. Typically the spatial resolution of each sensor is 1 to 10 meters. Distributed sensing is accomplished by sending a pulse of light down a fiber and interpreting the backscattered light from that pulse. By looking at Rayleigh, Brillouin, and Raman backscatter, it is possible to detect acoustic, strain/temperature, and temperature, respectively. Distributed sensing can replace the often-cumbersome and costly integration of hundreds or thousands of separate sensors into a single continuous solution.

There are three main types of distributed sensing applications.

As noted above, in a distributed sensor network, backscattered light can be broken down into three components: Rayleigh, Brillouin, and Raman.

Rayleigh backscatter is used primarily for distributed acoustic applications. Acoustic signals or sound waves that impact the fiber cause small changes in the refractive index. These changes can be detected with Rayleigh backscatter when using a coherent optical time-domain reflectometer (COTDR). Standard singlemode optical fiber is typically used. 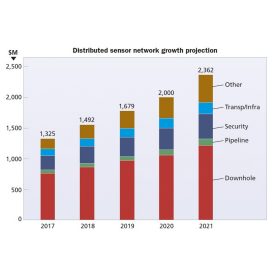 According to Future Market Insights, the oil and gas market segments are key drivers in the growth of distributed sensor networks, and dominate the global distributed fiber-optic sensor market. The technology, for example, can be used in downwell applications, and in both above- and below-ground pipelines for leak detection and prevention. The technology is also valuable in the security segment, for perimeter security applications.

Geographically, North America is expected to be the largest market for distributed sensors, and temperature sensing is expected to lead the application category.

Distributed sensor networks have value in a variety of applications, including infrastructures for pipeline leak prevention and detection, oil and gas systems, and downwell monitoring.

DAS, DTS, and DSS are all appropriate for pipeline leak prevention and detection. A DAS network can locate leaks along a pipeline from the noise created when liquid or gas moves through a small hole. The leak can also create a negative pressure wave generated from the pressure differential at the hole location, which travels down the length of the pipeline and is detected.

A DTS network can detect changes in soil temperature surrounding high-pressure gas lines via the Joule-Thomson Effect. And using DSS networks, a leak from a high-pressure gas line can cause the temperature of the soil to change via the Joule-Thomson Effect as well as cause the ground to heave. Ground movement in the vicinity of the pipeline can also be detected from seismic or geological activity.

All industries need standards. Standards help to ensure compatibility and interoperability, and also help make product development simpler. Overall, there are few standards on distributed fiber-optic sensing, although several have been published.

To provide more awareness of the benefits of optical sensing technologies, a new trade association, the Fiber Optic Sensing Association (FOSA), has been formed. The association’s mission is “to educate industry, government and the public on the benefits of using advanced optical fiber based sensing technologies to enhance public safety, promote security of critical facilities and infrastructure, and protect the environment.” FOSA launched in April 2017 and held its inaugural meeting in May.

As in other networks, a distributed sensor network contains both active (source/interrogator boxes) and passive (fiber-optic cable, hardware, and connectivity) components. When selecting system components, the following factors should be considered.

Distributed sensing networks are growing in number and can provide benefits across multiple applications, such as optical fiber’s immunity to electromagnetic interference when used as the sensing medium. In industrial and manufacturing applications, where conditions can be harsh and uptime and reliability are critical, the networks enable continuous monitoring and provide critical analysis that can help detect potential problems before they occur.

In this article, you have learned about the different sensing methods, how the technology works, many of the benefits, and potential applications. Distributed acoustic, temperature, and strain sensing applies to many of the same verticals where optical fiber is used for communications.

Over the past 10 years, the technology has matured and is now used to monitor thousands of kilometers of pipelines, thousands of oil and gas underground wells, and more. With the market for fiber-optic sensing growing at a compound annual growth rate of 10.4 percent a year from 2016-2026, the maturation of the market, applications, and solutions will continue.

With the creation of the Fiber Optic Sensing Association, fiber sensing has a champion that will help educate industry and government as well as accelerate the adoption of the technology. While this article may have been the first time you have heard about distributed fiber-optic sensing, it probably won’t be the last.