Sunil Chhetri has made a career out of putting his football opponents through their paces. The Samsung Gear S3, featuring tough Corning® Gorilla® Glass SR+ is the one smartwatch that can keep pace with him. 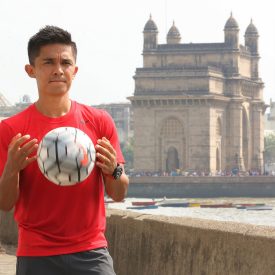 In the world of Indian football, Sunil Chhetri is a superstar. To his beloved fans, a living legend for his outstanding play, leadership and accomplishments. He began his career at the age of 17, playing for Mohun Bagan in 2002, then moving to JCT where he scored an incredible 21 goals in 48 games. Chhetri cemented his legacy as a football hero with the Indian National Team, helping the team win the Nehru Cup in 2007, 2009 and 2012, in addition to the 2011 SAFF Championship. He has earned himself the 2011 Arjuna Award, 2008 AFC Challenge Cup Most Valuable Player and AIFF Player of the Year in 2007, 2011, 2013 and 2014. Most impressive, Chhetri is the all-time goal scorer for the India National Team with 54 goals in 95 appearances.

Such good fortune does not come easy. To compete and win at such a high level requires rigorous daily training, constant conditioning, plus practice, practice and more practice. Chhetri’s fame and stature also keeps him busy with public appearances, teaching and sharing his football skills, plus a hectic travel schedule. He keeps it all together with his Samsung Gear S3, featuring Corning® Gorilla® Glass SR+. This tough smartwatch helps Chhetri keep pace on daily runs, workouts and on the fields, while tough Gorilla Glass SR+ helps the watch withstand bumps and resist scratches. Furthermore, the Samsung Gear S3 is stylish enough to accompany Chhetri off the field and into the public where appearance is everything.

It’s one thing to design a smartwatch with stunning style, and quite another when that same smartwatch has the military-grade durability to resist water, dust and extreme temperatures. Meet the Samsung Gear S3. Adding even more toughness, the Gear S3 has a 1.3-inch display featuring Corning® Gorilla® Glass SR+. In lab tests, this one-of-a-kind glass composite delivered up to 70 percent better damage resistance against impacts and 25 percent better surface reflection compared with alternative cover materials. Plus, Gorilla Glass SR+ demonstrated superior scratch resistance, approaching that of alternative luxury cover materials, while maintaining the optical clarity and touch sensitivity required for on-the-go connectivity. Paired with the Samsung Galaxy S8 smartphone, featuring next-generation Corning® Gorilla® Glass 5, and you have yourself a technological powerhouse. Tough does indeed wear well.