In the Nick of time.

In the Nick of time.

Early mornings, long distances, freezing conditions, 2,000 foot drops and the elements of danger were no match for Nick and his HTC U Ultra, featuring tough Corning® Gorilla® Glass 5. 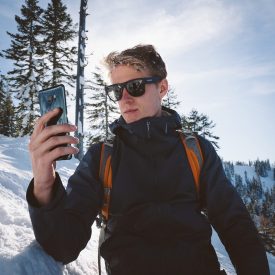 Simply said, Nick Miller is addicted to adventure and travel. Where most of us dream of places we’d love to visit and adventures we want to take, Nick is checking off his bucket list at a record pace. Which is very impressive when you consider that at just 31 years old, he has founded 4 companies, has a degree in Mechatronics Engineering and somehow fit in the time to travel to more than 30 countries, capturing his adventures with spectacular photography.

For Nick, photography is not just about taking awe-inspiring images. Instead he posts these images on social media as a means of motivating and challenging his audience to get outside themselves and live life to the fullest. On this particular trip, Nick and his brother set aside one week to travel 2,000 miles across the western United States. It was a race against time, weather and changing altitudes, as he managed to explore Arizona’s Horseshoe Bend, Antelope Canyon and Grand Canyon; Utah’s Zion National Park; California’s Yosemite National Park; Oregon’s Multnomah Falls; and Washington’s Mount St. Helens.

In addition to his brother, Nick’s faithful travel companion was the HTC U Ultra, featuring Corning® Gorilla® Glass 5. As you’ll see in the video, the HTC U Ultra took on the heights, provided amazing selfies, and launched the critical apps Nick relies on to meet his goals.

When designing the stunning new U Ultra, HTC didn’t cut any corners. Recognizing that Corning® Gorilla® Glass 5 raised the bar for protection against drops — surviving 1.6-meter drops onto rough surfaces up to 80% of the time — HTC chose Gorilla Glass 5 as the cover glass for the U Ultra’s impressive 5.7” Quad-HD display. A true comfort in your hands, the molded glass front and back accentuates a symmetrical, fluid blend between polished metal and smooth, durable glass. For taking selfies, the new camera lets you easily switch between the high-resolution detail of 16MP and the unparalleled 4x light sensitivity over standard mode with the new UltraPixel™ technology. The U Ultra truly acts as a worthy travel companion with the introduction of HTC Sense Companion. Paired with built-in voice recognition, it’s able to recognize your voice and respond. And when it comes to storing all your travel memories, it’s good to know the HTC U Ultra supports extended memory with a microSD™ up to 2TB. All good reasons to make this smartphone a constant partner for all adventures life throws your way.