In Ninja circles, Michelle Warnky is already a legend. Today she still competes at the highest level, while also championing the sport through the Movement Lab she built, owns and runs for parkour and obstacle enthusiasts. It’s a tough balancing act she keeps together with the help of her HTC U11 smartphone featuring tough Corning® Gorilla® Glass. 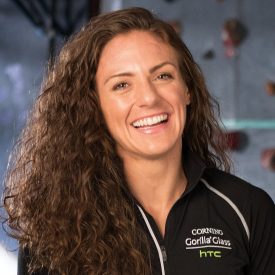 As one of three women who were first to complete the entire qualifying course on the televised Ninja competition, Michelle Warnky became a true pioneer in an otherwise male-dominated sport. Combining brute strength with incredible balance, agility and stamina — it’s easy to call this woman tough. But, when you peel back her extreme athletic ability, Michelle’s true strength is her mental toughness.

Michelle grew up playing sports with the boys. And she played to win. An avid climber and varsity athlete, she ascended to the college nationals in track. Always competing, often winning and never slowing down, she found a kindred spirit with fellow Ninja athletes. Once again, she was competing with the boys and loving every minute of it.

Combining her desire to keep competing with the realities of making a steady living, Michelle opened one of only a few U.S. gyms dedicated to the unconventional training methods for parkour and obstacles. With hammer in hand, she literally built it from the ground up. Her goal was not to build an empire, but to provide a training facility where kindred spirits of all ages can take advantage of the unique challenges, overcome the obstacles and genuinely have a blast.

From the basics of capturing video of her students and running her training apps to the realities of staying on schedule and staying in touch, Michelle relies on her HTC U11. Tough from the outside in, the HTC U11 features Corning® Gorilla® Glass on both the front and back of its 3D surface.

The HTC U11 does just about everything you’d want from in a smartphone — and a lot more. It’s the first smartphone with groundbreaking Edge Sense technology. With a simple squeeze of the phone you can instantly launch your favorite apps and features. The HTC U11 with HTC Alexa is the also world's first smartphone to launch Amazon's Alexa voice service hands-free by simply saying 'Alexa.' And featuring Corning® Gorilla® Glass on both the front and back, its 3D liquid glass surface is as tough as it is comfortable to hold. An IP67 water-resistance rating adds even more peace of mind. These are all important features when you live your life on the go. And who doesn’t? Raising the bar even further, the HTC U11 camera has HTC’s new UltraSpeed AutoFocus, while its spectacular audio performance provides active noise cancellation. All pretty smart from such a tough device.