Leaving the comforts of city life, Rang Lin has dedicated the last 4 years travelling to the remotest villages of Tibet. Taking in the hospitality of the local villagers, he expresses his deep gratitude by offering them the gift of memories in the form of printed photographs that are deeply appreciated and cherished. 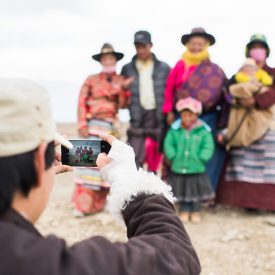 Rang Lin has a tremendous heart. His deep respect and curiosity of Tibet and Tibetan people has guided his 4-year journey through the tough, magnificent and sometimes harsh terrain of this land. His passion for photography is only equaled by his genuine interest in connecting with the people in remote Tibetan villages and leaving behind prints of the photos he has taken of his beloved subjects. Void of photo studios and modern technology, many people in these remote villages have never really owned a print of themselves, their family or their friends. Using his “Mobile Photo Studio,” Rang can prepare and print his images right on site. Such a keepsake creates a lasting and precious memory for the remote villagers. Rang is humbled and heartened by the emotions of gifting such a memory.

Critical to his travels in Tibet is his smartphone featuring tough Corning® Gorilla® Glass. In addition to using it as a camera, he relies on it for trip preparation, research of remote destinations, GPS navigation and to stay in touch with his contacts. On this particular journey, Rang travelled to the freezing and unforgiving Tibetan Plateau. Adjusting to an altitude of 4,600 meters (15,091 feet) and living in this rugged terrain presents incredibly tough challenges on the mind and body. Not to mention his phone. This is precisely why Rang relies on a smartphone featuring the superior damage resistance of Corning® Gorilla® Glass.