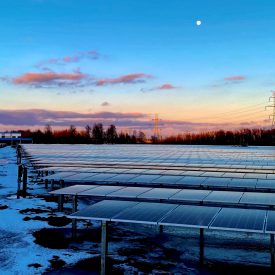 In Tonawanda, New York, the Niagara River picks up speed as it courses north toward the falls. To the east, just over the river’s grassy bank, lie rows and rows of onyx black solar panels, glistening from the corner lot of Riverview Solar Technology Park. The new solar array soaks up the Western New York sun and converts the rays into energy – energy that’s now allocated for Corning Incorporated.

The array, which went online in December 2020, in addition to five solar community solar projects announced today, expands Corning’s renewable energy use in New York State. Together, the six solar projects will help avoid more than 4.44 million pounds of greenhouse gas emissions annually, equivalent to the energy use of approximately 243 homes.

If you drove by the Tonawanda site two years ago, you would see the remnants of a petroleum storage facility, with one derelict tank rising over the field. Today, it’s transformed to make way for clean energy. Montante Solar remediated the site, engineered, and constructed the solar array. Corning supported the project by entering into a long-term power purchase agreement with Kenyon Energy to buy the array’s energy output for its Advanced Optics facility in Canton, New York.

“We recognize the transformative potential of solar energy,” Morse said. “It creates value for our customers and shareholders, while supporting healthier communities around the world.”

Corning also made five other long-term community solar agreements with Kendall Sustainable Infrastructure for solar projects engineered and constructed by GreenSpark Solar. Corning functions as an anchor-off-taker on these community solar projects in New York State, that serve not only Corning, but also local communities. These projects create local jobs, make lease payments, add to tax rolls, and create energy savings for community members.  A portion of the solar array is available for community members to sign up for through the NY-Sun community solar program. Participants receive energy savings, along with helping to create power from a renewable resource.

While polysilicon is the most energy-intensive component of the solar-panel supply chain, the six New York projects contain 50 percent less embodied carbon than typical solar panels – all due to the polysilicon produced by Hemlock Semiconductor Corporation located in Hemlock, Michigan.

New York has the most aggressive clean energy and climate agenda in the country. Case in point: In 2019, the state passed the Climate Leadership and Community Protection Act (Climate Act), which mandates rigorous goals targeting climate change. By 2030, New York plans for renewable resources to account for 70 percent of its electricity production, with a goal of a zero-emission electricity sector by 2040.

New York is targeting six gigawatts of that energy to come from solar by 2025. Corning’s solar projects strategically align with and contribute to the Climate Act.

“Partnerships like this are advancing our clean energy and climate goals and highlighting that the business sector is uniquely positioned to advance clean energy and decarbonization at the corporate level, while bringing additional renewable resources to their communities,” said David Sandbank, Vice President of Distribute Energy Resources at NYSERDA. “We commend Corning and Montante Solar for making use of a brownfield site and for their investment in the clean energy economy and future of New York State.”

This is far from Corning’s beginning with solar energy in New York. In 2019, the company installed an array at its Corning Life Sciences plant in Oneonta, distributing electricity to local consumers directly through the grid. The Oneonta array alone helps avoid more than 185 thousand pounds of greenhouse gas emissions per year.

Corning is proud to continue to enable investment in solar energy in New York State. In 2020, Corning ranked among the top 25 corporate solar energy users in the U.S. by the Solar Energy Industries Association.

In 2019, along with its Oneonta installation, Corning put solar arrays at its Life Sciences facilities in Wujiang, China, and Amsterdam, Netherlands, as well. In total, these solar arrays help avoid 1,734 tons of greenhouse gas emissions per year. Learn about how Life Sciences Technologies continues to address climate impact.

In 2018, Corning joined Apple and nine of its other suppliers to jointly invest $300 million by 2022 into the China Clean Energy Fund. The fund supports clean energy projects totaling more than 1 gigawatt of renewable energy in China.

And the story doesn’t stop here. Corning is committed to investing in our people and our communities to create better places to live and work. We make products with at the goal of sustainability. And with our solar investments, we aim to pave the way for cleaner air, cleaner water, and healthier generations to come.