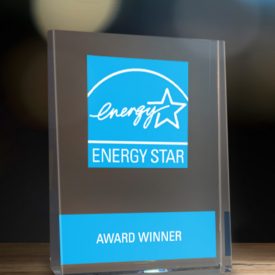 Since its launch in 2006, Corning's Global Energy Management (GEM) team has worked with ENERGY STAR® to implement effective energy-saving initiatives, and to help other companies and individuals save resources. Corning achieved the ENERGY STAR® Partner of the Year award 2014-2015, and the Sustained Excellence designation of the award 2016-2022.

Partner of the Year is the U.S. Environmental Protection Agency's highest recognition, one which Corning is honored to share with some of the world's most energy-conscious companies. The Sustained Excellence designation of the award is reserved for companies achieving Partner of the Year several years in a row, and for those making constant improvements to their energy management programs.

In addition, several Corning facilities have achieved the ENERGY STAR Challenge for Industry, which asks industrial sites to reduce energy intensity by 10 percent within five years. In 2016, Corning's Concord, North Carolina, site hosted the world's first ENERGY STAR Challenge for Industry Showcase event to celebrate its achievement, with several other domestic and international Corning achievers following with their own Showcases.

More on Corning and ENERGY STAR