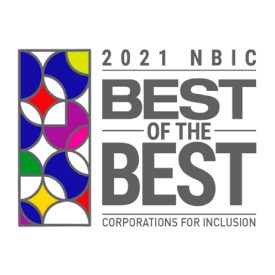 Corning has been on the list six years in a row, validating the company’s diversity, equity, and inclusion journey and efforts to extend it cross-industry.

At Corning, diversity, equity, and inclusion is a journey, not an endpoint, says Dana Moss, Corning’s chief diversity, equity, and inclusion officer. Being named a National Business Inclusion Consortium (NBIC) 2021 Best-of-the-Best Corporation for Inclusion, proves that Corning is on the right track – not only within the company, but beyond its walls.

“As the world evolves, we continue to learn and grow, always striving to do, and be, better,” Dana said. “Corning is a place where employees can, and should, be able to bring their whole selves to work. This is a shared responsibility for our leadership and employees, and we take this very seriously.”

The NBIC, which includes the National LGBT Chamber of Commerce (NGLCC) along with other partners, released its sixth annual list of the 50 Best-of-the-Best corporations earlier this month. Corning, which has been recognized all six years, was named alongside companies such as Bank of America, Capital One, CVS Health, Johnson & Johnson, JPMorgan Chase & Co., and Lowe’s. Representatives gathered for an awards ceremony in Hollywood, Florida, as part of NGLCC’s Back to Business (B2B) Summit.

“The Best-of-the-Best designation honors corporations for their commitment to America’s diverse employees and business owners, which includes LGBT people, people of color, women, and people with disabilities,” said Justin Nelson, NGLCC co-founder and president, in a release. “This designation is highly competitive and is bestowed only to corporations that we see constantly striving to strengthen and celebrate diversity. These corporations being honored are true leaders in ongoing global commitments to create a better future for all diverse communities in business-- especially as we work to help all our communities recover equitably from the pandemic.”

To be considered for a Best-of-the-Best recognition, corporations complete a detailed survey about inclusive programs, including supplier diversity initiatives, employee resource groups, and workplace engagement opportunities. Companies also provide a report of diversity and inclusion policies and achievements as well as other awards and recognitions received.

Best-of-the-Best recognizes more than Corning being an inclusive workplace – it also denotes companies that extend that culture to their suppliers. 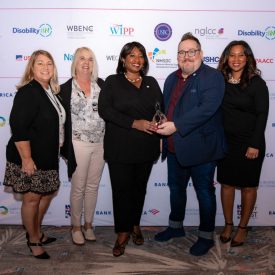 Corning has been on the list six years in a row, validating the company’s diversity, equity, and inclusion journey and efforts to extend it cross-industry.

“As a global corporation with manufacturing facilities around the world, Corning relies on a vast network of suppliers,” said Jeanne Estep, global compliance & supply chain sustainability director from Corning’s Global Supply Management. “During 2020, we prioritized and transformed our supplier diversity programs. This award recognizes the steps we have taken so far, including partnering with our strategic customers and suppliers to prioritize supplier diversity and increase our collective spend. We are extremely proud to act as a leader in this space.”

“Being named to the list is a great honor; being named to the list for the sixth time is truly a testament to Corning’s sustained commitment to fostering a diverse and inclusive workplace,” said Dana. “It shows us we’re doing something right, and it allows us to serve as an example for others.”

Dana continued, “We are proud of what we are doing and have done, but we won’t rest here. Embracing and creating an inclusive culture is not just the right thing to do: it is vital to our progress as a company."