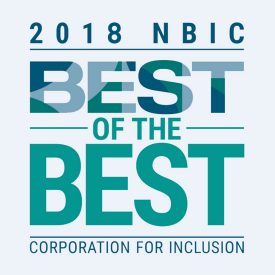 For the third consecutive year, Corning Incorporated has been named to the "Best-of-the-Best" list of corporations in America committed to diversity and inclusion across all communities.

Corning has annually been recognized as a business leader in diversity and inclusion since the National LGBT Chamber of Commerce (NGLCC), the business voice of the LGBT community, in collaboration with its partners in the National Business Inclusion Consortium (NBIC), began producing its list three years ago.

“Diversity and inclusion are inherent to our Values, especially Corning's belief in the fundamental dignity of The Individual,” said Christy Pambianchi, senior vice president, Human Resources. “We also know that diverse talent is a strategic advantage that drives innovation. So in order for the company to recruit and retain the best and brightest talent, we must unwaveringly provide an inclusive environment, where all employees can thrive.”

“The Best-of-the-Best designation honors corporations for their commitment to America’s diverse employees and business owners, which includes LGBT, people of color, women, and people with disabilities,” said NGLCC Co-Founder and President Justin Nelson.

“This designation is highly competitive and is bestowed only to corporations that we see constantly striving to strengthen and celebrate diversity. These corporations being honored are true leaders in ongoing global commitments to create a better future for all diverse communities in business,” he said.

NGLCC formed the National Business Inclusion Consortium in 2011, and its members represent a total of over $9 trillion in annual economic strength along with significant contributions to the marketplace and workplace.