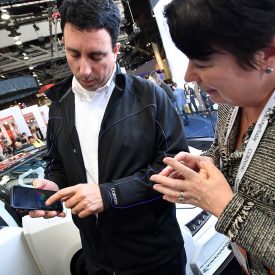 Versalume is helping get Corning Fibrance technology into unexpected places

What could become cooler with light?

What could turn heads, simply from the addition of glowing strands of glass?

And what could make a memorable statement if that light becomes intelligent – changing and intensifying with heat, with speed, with music, with altitude?

For Mario Paniccia, the answer is: Just about everything.

Paniccia is CEO of Versalume, a new Silicon Valley firm devoted to taking Corning® Fibrance® Light-Diffusing Fiber into applications from consumer electronics, to architecture, to automotive, wearables, and anywhere else one would want brilliant, captivating, and fun lighting.

Corning invested in Versalume when the firm launched in June of 2016 and agreed to supply the startup with Fibrance fibers.

In turn, Paniccia and a handful of enterprising colleagues have captured the interest of sports-equipment designers, drone manufacturers, consumer electronics makers, automakers and even theme parks by providing solutions with Fibrance fiber.

They’re all interested in one thing -- how Fibrance technology can help make their product or service stand out.

To show them, Paniccia’s team has become adept at creating prototypes. With a screwdriver and glue gun, for example, they transformed a sports safety helmet in time for a sales meeting and intrigued designers with its distinctive flair and heightened visibility.

Customers love the consistent uniform light emission of Fibrance technology, he said – a distinct advantage over LEDs, which can result in spots of light. Customers also like the playful, brilliant color stories the fiber can emit.

At CES® 2017, he sported a black athletic jacket with a Glass Age logo and brilliant strands of Fibrance stitched directly into the sleeve contours and into the back yoke of the jacket. He sourced jackets for his team from Corning, then had  a seamstress deconstruct them to embed lengths of Fibrance fibers into the seams.

When complimented on his striking presence, he joyfully showed how the Versalume smartphone app could change the Fibrance strands from glowing purple to flashing green to red that blinks to the sound of music.

“We were wearing one of these jackets in Beijing a couple of weeks ago, and people were coming up to us asking all about them,” he said. “Then it hit me that this could be a new market opportunity for us. I think we could have sold them off our backs!”

Versalume is equipped to serve clients both large and small,developing products geared to not just big manufacturers but to the design community.  By having creative makers play with Fibrance technology and see the versatility of its potential, more and more people are coming up with new applications and usages.

His visions are grand. How about a kite outlined with Fibrance technology? Safety vests for night time, biking, runners? Or how about decorating lobbies in buildings, or lighting up gaming PCs? Even a hip restaurant waitstaff in uniforms that glow and blink?

Paniccia believes that the more people see Fibrance technology in unexpected places, the more they’ll be inspired to innovate and find new applications for using it.

“It’s really getting people talking about smart lighting based on things that matter to their brand. They can customize it to get whatever features they want. That’s what we want to do for our customers.

“And what’s really exciting is that  we are just at the beginning -- and the applications are endless.”