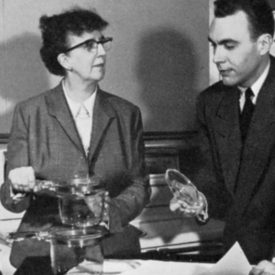 The PYREX® kitchen brand may owe its popularity over the past 100 years to a letter written to Corning in 1929 by a college home economics instructor.

She pointed out “that some PYREX pieces came in awkward sizes and shapes“ and encouraged Corning to apply home economics research, along with consumer feedback, to improve the product, according to “The Generations of Corning: The life and times of a global corporation.”

Sales of the cookware were down significantly, and with the Great Depression looming, many U.S. families considered PYREX  too expensive. Corning leadership knew that PYREX needed a revamp, and after reading Maltby’s letter, they hired her to manage a new consumer service department.

Maltby, holding degrees from Cornell, Iowa State and Syracuse, spent her early days at Corning corresponding with consumers and creating instructions on how to use PYREX. But by 1931, she expanded her team and launched Corning’s first consumer test kitchen.

"Her consumer instinct was so strong that Corning executives would often ask: 'What does Lucy think?'" 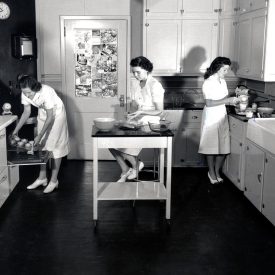 At first, the kitchen provided salesmen with a “unique week-long training program… [where they] learned how to ‘bake a cake, make tea or coffee, or scalloped potatoes,’ and to give them firsthand knowledge of cooking in PYREX,” as described in “Corning and the Craft of Innovation.” Not long after, the testing including products and their improvement.

Under Maltby’s leadership, the testing led to PYREX cake pans that added handles and volume measurements, while ensuring other pans could fit side-by-side in a standard oven.

By 1933, PYREX sales began to climb, and the brand started to reposition itself as an ovenware product for the masses. Meanwhile, the test kitchen also grew, eventually employing as many as 35 people.

Later, Maltby led the creation of cookware with beautiful designs and patterns, allowing one pan to move from the stovetop to the family tabletop. “The Generations of Corning” notes that her consumer instinct was so strong that Corning executives would often say: "What does Lucy think?"

Maltby worked for Corning until 1965, and when she died in 1984, Corning CEO Jamie Houghton paid tribute to her in a statement cited in the book “Remarkable women in New York State history.”

“The reputation [Corning products enjoy] in the consumer housewares market,” Jamie said, “is due in no small part to Lucy Maltby’s unswerving adherence to integrity.”

Though Corning no longer manufactures housewares, Lucy Maltby, as Jamie’s quote suggests, will always deserve a place in the company’s history -- and the recognition worthy of a Glass Hero.