Optical physics plays an enormous role in increasing the computing power of everything from the chips in cell phones to quantum computers.

It wasn’t that long ago that having a computer in your pocket seemed impossible. Even personal computers aren’t that old, but since they debuted in 1975 and weighed more than 50 pounds, we’ve seen massive increases in what our devices are capable of. As processing speeds are increasing, devices are getting smaller and more efficient – all while taking up less space.

That’s in large part thanks to smaller microprocessors, but today, work in quantum computing is opening up exciting new possibilities in materials simulation, cryptography, and data storage. As computers get more powerful and efficient, Corning’s expertise in optical physics will have a key role in shaping their future, whether they’re in your pocket or in a lab.

How Microprocessors are Made

Microprocessors, or the chips that power everything from handheld devices to supercomputers, are made through a process called photolithography, which involves using lasers to inscribe a pattern onto a wafer. Wafers are a kind of semiconductor, which is a material that enables the circuits on a microprocessor to operate. As photolithography gets more precise, microprocessors can get smaller.

For most consumer chips, the focus is on improving the materials used in the antennas inside chips that connect users to the internet. Improvements to these antennas allow for faster data rates. In developing smaller and smaller chips, the challenge for manufacturers is balancing these higher data rates with size constraints. Smaller chips are especially important in mobile applications, where battery life is a key selling point. Because smaller chips run at lower voltages and have less resistance, they also consume less battery power. 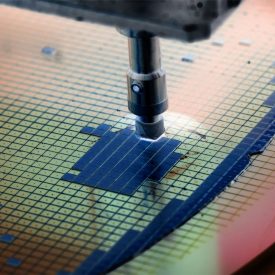 Corning is enabling the increased efficiency of these high-tech devices by supplying optical materials, components, and systems that contribute to many different stages of semiconductor creation. The optical attributes of our materials are uniquely suited for this task, in part because they are durable, transmit light well, and have low coefficients of thermal expansion, which means they don’t change size much under the heat of a laser.

Corning also contributes lenses and measurement systems, both of which leverage optical physics to ensure chip manufacturing processes are working as they should. As new techniques are developed for creating semiconductors, Corning’s expertise will continue to play a key role in making devices faster, smarter, and more efficient.

Quantum computing is another area of research where optical physicists are finding ways to exponentially increase computing power. By taking advantage of quantum bits of memory instead of the binary memory that conventional computers use, they work with machines that are capable of things no conventional computer could ever manage.

Quantum physics involves studying the ways light and matter interact on a molecular level. Quantum computing considers photons, or individual rays of light, and the ways they can impact and change electrons and other parts of the atom. Quantum computing is optical physics at the most minute, microscopic level. Because they use quantum bits, quantum computers can fundamentally redefine the way that computers process information.

As a result, quantum computers can better simulate the way materials interact on a molecular level. These simulations can guide Corning’s materials research moving forward, but quantum computing also has the potential to revolutionize everything from data storage to cryptography. Although the applications of this technology are in their early stages, optical physics could play a key role in understanding quantum computing.

As computing power continues to grow, Corning’s optical physics capabilities will only become more essential. Whether it’s making our devices better or pushing the boundaries of what’s possible, optical physics will be crucial in guiding us toward a future where computers can do things we only dream of today. After all, it wasn’t that long ago that personal computers weighed 50 pounds.

For both glass and ceramics, new innovations are bending the rules of what's possible with flexible materials