Silver: The Virtuoso of the Periodic Table | Silver's Technical and Colorful Uses in Glass Engineering | Corning 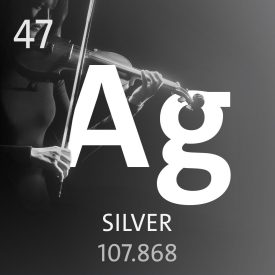 When you think of silver, what comes to mind first? Probably jewelry, coins, or flatware. But silver also has a special place in Corning’s history of technical glass innovations. And for senior research scientist Dr. Jesse Kohl, silver has a sentimental attachment as well as a practical one: It’s the element that got him interested in glass science and in Corning specifically.

Kohl became fascinated by glass as a child, after unearthing discarded vintage bottles on his family’s farm in Oregon. In middle school, he landed a job at the local glass factory, Northstar Glassworks. One day, he had the opportunity to observe visiting glass artist Suellen Fowler at work. Known for her small and detailed perfume bottles, Fowler employs custom coloring techniques, including one that intrigued Kohl. By heat treating a silver and germanium doped borosilicate glass, Fowler could produce many different colors by using the flame of a torch as a paint brush. That’s when Kohl became smitten with silver.

Several years later, Kohl attended the Glass Arts Society conference in Corning, New York, and joined a field trip to Sullivan Park, Corning Incorporated’s legendary research and development facility. There, he learned about Corning’s history of using silver in technical glasses, including the company’s pioneering work with photochromic glass in the 1960s. The experience inspired him to study chemistry in college, and he returned to Corning as an intern studying glass compositions featuring silver as a key ingredient. Kohl joined Corning as a research scientist in 2015, and today he is exploring a new family of glass-ceramics with tunable optical properties, which can be thermally treated to produce a range of colors. “The material is intended for applications where you need tinting as well as heat protection, such as architecture or automotive sun roofs,” explains Kohl.

The project builds on the pioneering work done by his legendary predecessors. 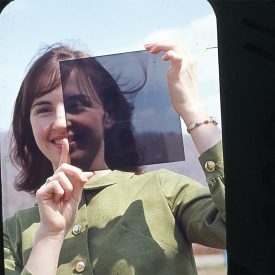 In the 1940s, Corning chemist Dr. William Armistead (who went on to serve as director of research) developed what became known as his “rainbow glasses.”  Armistead discovered that you could produce a glass with a broad range of colors by dissolving silver halides in phase-separated borosilicate glass, adding a weak reducing agent, and heat treating the glass under different conditions and temperatures.

Two decades later, one of Corning’s most prolific inventors, Dr. Donald Stookey, developed photochromic lenses by incorporating tiny crystals of silver chloride into glass. Perhaps you’ve worn transition lenses yourself and wondered about the science behind them. When exposed to light, electrons from the glass combine with the colorless silver ions to form elemental silver. Because elemental silver is visible, the lenses appear darker. When the light source is removed, the lenses become clear again as the silver returns to its original ionic state.

Kohl notes that the Corning scientists were ahead of their time. Today, researchers continue to explore how to use metallic nanoparticles to manipulate light in a relatively new discipline called plasmonics.  “Armistead and Stookey were doing a remarkable amount of nanotechnology and nanoengineering in the 1940s and 1950s when the term plasmonics was just emerging,” Kohl says.

So, silver is clearly a valuable element when it comes to glass engineering, but what’s it like to work with? Despite his love for the metal, Kohl admits that it’s a high-maintenance relationship. “Silver is a fussy element,” he says. “It’s difficult to control and you have to be very exacting in the batching and melting process because many different factors can affect the outcome, including the chemistry of the furnace, the melting time, the temperature, and the post-processing steps of heat-treating the glass to develop certain colors.” But with decades of experience in glass compositions and processing, Corning has figured out how to manage silver to produce exciting results.

Your home most likely features copper wiring, and possibly copper plumbing and roofing components as well.

Potassium is an ingredient in many of Corning’s technical glasses.