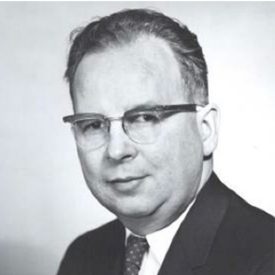 After earning a Ph.D. in physical chemistry from MIT, Dr. Stanley Donald Stookey joined Corning as a glass research chemist in 1940, eager to begin exploratory research into the “real unknown.” Seeing himself as a modern day alchemist, he devoted much of his early career to the investigation of the phenomenon seen in photosensitive, opal and ruby glasses. Later, Dr. Stookey would develop photochromic glass, a light-sensitive material for eyeglass lenses that would turn dark in sunlight and return to a clear lens indoors.

Stookey’s work in opal glasses and his understanding of phase separation and crystal formation led him to discover FotoForm™, a family of chemically machinable glasses, originally developed as a potential material for color television aperture masks.

While experimenting with FotoForm™, due to the serendipity of a furnace malfunction and a prepared mind, Dr. Stookey made his next important discovery, a completely new family of materials -- glass ceramics. Trademarked as Pyroceram®, these revolutionary materials exhibited extraordinary strength, heat resistance and low expansion, and later became the foundation of Corning’s consumer cookware products.

Dr. Stookey is credited with more than 60 patents during his Corning career. In 1986, he was presented with the National Medal of Technology by President Ronald Reagan for his invention of glass-ceramics, photosensitive glass and photochromic glass. He retired in 1987 as Director of Fundamental Chemical Research, leaving behind a tangible legacy in the Stookey Award, bestowed annually on a Corning scientist for outstanding exploratory research accomplishments.