Silicon: The Collaborator of the Periodic Table | Backbone of Corning's Glass Innovations | Corning

Glass Engineer Natesan Venkataraman still recalls his first encounter with silicon in the 10th grade. His teacher gave him several unidentified materials to explore. The first looked like polished metal and felt brittle. The second behaved like silly putty. The third he recognized easily: a piece of transparent glass. After he had spent some time handling the materials, he learned that the first and second items were a silicon wafer and a silicone polymer. But, as a budding scientist, Venkataraman was more interested in their composition. “When I went to see what these materials were made of, they all had silicon as the primary element. It blew my mind that one element could create materials that looked and behaved so differently.”

Today, it’s not surprising that silicon remains one of Venkataraman’s favorite elements, since it is the backbone of so much of Corning’s work. Silicon combined with oxygen becomes silica, the quintessential glass-making oxide. Silica is the foundation of numerous Corning glass innovations including liquid-crystal display glass; thin, damage-resistant cover glass for mobile devices; and pharmaceutical packaging that resists breaks and cracks. 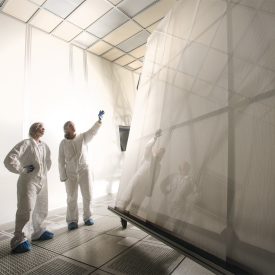 Silicon is at the heart of numerous Corning glass innovations including the world’s most pristine liquid crystal display glass, which the company produces in sheets twice as large as a king-size bed and as thin as a business card.

Silicon has been instrumental in other Corning innovations as well. Corning chemist Dr. Franklin Hyde earned the title “the Father of Silicones” after developing the versatile polymer in the mid-1930s. Hyde also invented high-purity fused silica, which is used in diverse technologies from telescope mirrors to optical fiber to 3D sensing components in mobile phones.

Of course, the average person is likely to be more aware of silicon’s role in semiconductor technology. Silicon innovations by semiconductor manufacturers have resulted in a 1-trillion-fold increase in computing performance from 1956 to 2015!

“If you were to take one element that is the most impactful to Corning Incorporated and to humans in general over the past 15 years, it would unquestionably be silicon,” says Dr. Adam Ellison, technology delivery officer for Corning Glass Technologies. He pauses and adds, “By leaps and bounds.” 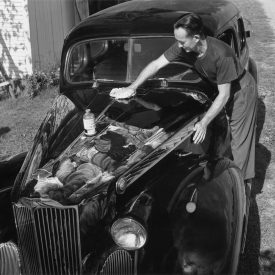 Dr. James Franklin Hyde, the “Father of Silicones,” demonstrates one of the many applications of the versatile material he developed in the 1930s.

What makes silicon so valuable as a building block? By weight, it’s one of the most common elements in the earth’s crust, second only to carbon. But silicon’s versatility has less to do with its availability and more to do with the way it bonds with other elements. As Corning’s Chief Strategy Officer Jeffrey Evenson has observed, “Silicon is an extremely gracious collaborator with its friends on the periodic table.” Silicon bonds easily with oxygen, carbon, nitrogen, and hydrogen, to name a few. And that barely begins to scratch the surface of its capabilities.

“We actually have the potential to use the entire periodic table in countless combinations to create new glass compositions with different attributes,” says Evenson. “To drive that point home, imagine holding the Oxford English Dictionary in your hands. Now think of how many words we can make with only 26 letters.”

Boron is considered a “low-abundance” element in the solar system and makes up only 0.001% of the Earth's crust.

When you think of silver, what comes to mind first? Probably jewelry, coins, or flatware.