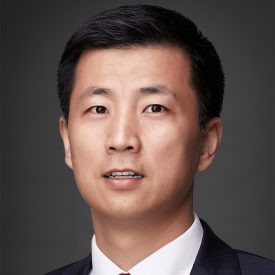 John Z. Zhang is senior vice president and general manager, Display. In this role, Zhang has end-to-end responsibility for the management of the Display Market-Access Platform at Corning, including Corning Display Technologies, Corning Precision Materials, and High Performance Displays. Zhang is also in charge of identifying and developing new products and business opportunities in display-related markets.

Zhang joined Corning in 2008 as director, corporate development. In this role, he was involved in a number of external development transactions including the formation of Corsam Technologies LLC and the acquisition of Optimum Manufacturing Corporation. He also participated in the external growth and strategy development initiatives for selected business units. In 2009, Zhang was appointed director, corporate development Asia Pacific. Working with Corning Display Technologies and the Greater China leadership team, he was involved in the business development, structuring, and delivery of Corning’s first Display melting investment in China.

In 2010, Zhang further expanded his role to lead the strategy & corporate development organization of Corning International. He led the formation of Samsung Corning Advanced Glass with Samsung and Corning’s acquisition of Samsung Corning Precision Materials. In 2014, Zhang was named deputy general manager, Corning Display Technologies. In 2015, he was promoted to senior vice president and general manager, Corning Display Technologies, in charge of all operations of Display base business.

Prior to joining Corning, Zhang worked at Xerox Corporation, where he held management positions at both its operating units and corporate headquarters.

Zhang holds B.S./B.A. degrees in mathematics and economics, an M.S. in computer science, and an M.B.A. from the University of Rochester.