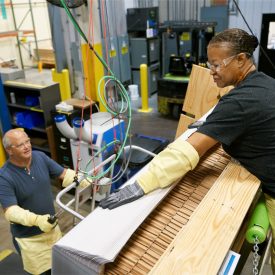 ​HARRODSBURG, Kentucky — The now-famous story of the phone call between Steve Jobs and Wendell Weeks about the launch of the first iPhone may be more than a decade old, but Apple's visit to Corning's Harrodsburg facility Tuesday illustrated that the excitement, dedication, and collaboration between the two companies has only grown.

At the event Tuesday, in addition to announcing a $250 million investment from Apple's Manufacturing Fund to Corning—which followed a 2017 investment announcement—Jeff Williams, Apple's chief operating officer, credited Corning for the innovative role it's continued to play in the creation of every generation of the iPhone, as well as other Apple products.

"It's great when Apple comes to visit us because it combines four things we truly care about," John Bayne, senior vice president and general manager, Corning® Gorilla® Glass, said. "One, deep collaboration with an incredibly important strategic customer. Two, our focus on innovation and new products. Three, our commitment to advanced manufacturing—doing manufacturing that’s never been done in the world before right here in this plant. And four, our employees.” 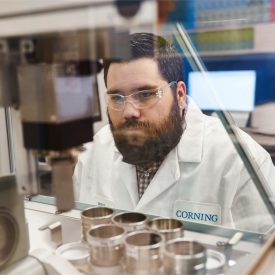 Following John, Jeff also emphasized the important role the Harrodsburg team played in the development of the glass for the new iPhone 11 and iPhone 11 pro.

"Just last week, as John mentioned, we announced two new phones, and they have the toughest glass in the world in a smartphone thanks to the work that you guys do here," Jeff said.

"I am a big believer in the connection that you have with something, and that physical connection is important, and all over the world, what people are holding, is the work you do here..." he told the employees at the Harrodsburg facility.

Jeff said he enjoyed coming to Harrodsburg, flying into the small town in the middle of horse country that houses some of the most advanced glass technology work in the world, to see firsthand the passion of the employees and leaders.

"...It's the people here," he said of the Harrodsburg facility, which has a reputation as a global center of excellence for glass innovation. "It's the innovation and the technology. It made our iPhone different, and we come here because the work you guys do is so great. So, I just wanted to say thank you."

At the event, Jeff held up his new iPhone 11, and explained that the whole back is “sculpted out of a single sheet of Corning glass.” Glass backs on smartphones, also a focus of discussion at Corning’s 2019 Investor Day, is one way Corning continues to capture more value per device—a growth driver for the company’s newly announced Strategy & Growth Framework.

The newest investment from Apple will continue to support Corning's research and development processes for next-generation devices, which both Jeff and John emphasized when referencing the ongoing collaboration between Apple and Corning.

"We had a fantastic announcement, and we are going to continue to work together," added Jeff. "We're not going away. We believe in the work you are doing and are thrilled to be a part of it."

Built on a legacy of delivering the toughest cover glass available for mobile devices, Corning® Gorilla® Glass 6 is our most durable cover glass yet.

How It Works: Strengthening Glass

How It Works: Strengthening Glass

Corning discusses how the strengthening of glass with ion exchange works.

The Clear Benefits of All Glass Designs

The Clear Benefits of All Glass Designs

Glass is appearing in plenty of places besides the front of your smartphone.