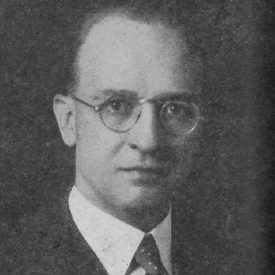 Glass can be a material of many appearances. When molten hot, it can appear gooey. When cooled, it can look frozen. This varying consistency -- or viscosity -- of glass historically had been hard to control, let alone predict, until Dr. Gordon Scott Fulcher’s mathematical discovery.

Fulcher, a legendary Corning scientist, developed a formula that would be later called the "Fulcher equation."  First published in a 1925 research paper during Fulcher’s time at Corning, the formula became the industry standard for measuring how temperature impacts different liquid or solid states of glass.

As a result, the glass industry gained a stronger understanding of the material and how to best form and manufacture it.

Before his discovery, Fulcher attended Northwestern University and earned both a bachelor’s and master’s degrees in physics. He later attended Clark University where he earned his Ph.D.

After a few professorships and a short research project during World War I, Fulcher accepted his position at Corning in 1920, then known as Corning Glass Works. There Fulcher performed extensive research on the electric melting of glass, which created the foundation for the Fulcher equation. He later retired in 1938.

In life after Corning, Fulcher continued to find success well beyond his work in equations, viscosity, and glass research.

"Dr. Fulcher was a pioneering thought leader in both technical and non-technical fields including economics, psychology, and scientific abstracting,” said John.

Fulcher was a brilliant scientist, but also a thoughtful researcher and journal editor. He set the simple, yet important scientific standard of abstracting. “This now-common practice of preceding a scientific journal with an abstract or summary is so universal we may take for granted that someone had to invent it,” John noted.

In retirement, Fulcher also published two short books on metacognition, or the understanding of thought processes, and researched such topics as economic theory and educational psychology.

Fulcher died in 1971, and left a legacy in glass research, scientific abstracting, and decision-making.

His alma mater, Northwestern, honored Fulcher and his book titled, “Common Sense Decision Making,” with a chaired professorship in his name. This year, Corning announced a new research sabbatical program, also in his name, focusing on fundamental glass science.

“Fulcher was able to transform his innovative thinking into action that has changed the world,” said John. “The scientific community, and specifically glass researchers, should be proud to claim him as our very own Renaissance man of glass science.”

Concerned about the scarcity of industrially relevant glass research in academia, Corning is working to strengthen the future of the U.S. glass industry through the Fulcher Sabbatical Program.

Concerned about the scarcity of industrially relevant glass research in academia, Corning is working to strengthen the future of the U.S. glass industry through the Fulcher Sabbatical Program.

Starting from the creation of a glass encasement for Thomas Edison's light bulb, Corning has a long legacy of scientific advancements.

Starting from the creation of a glass encasement for Thomas Edison's light bulb, Corning has a long legacy of scientific advancements.