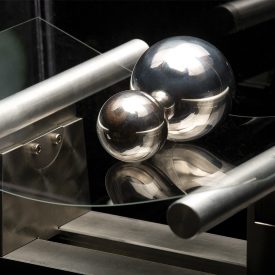 One of the most common misconceptions about glass is that it breaks because it’s inherently weak.  While glasses that we encounter on a daily basis generally can break with relative ease, the reasons glass breaks aren’t as simple as one might think. Glass generally breaks when flaws are present or introduced and enough tensile stress, or force, is applied to those flaws. These flaws could be anything from a microscopic imperfection caused during daily use to a severe interaction with a rough surface. In the absence of flaws, glass has demonstrated strengths greater than steel, nearly approaching its theoretical strength of over 2 million pounds of force per square inch!

For experts working on Gorilla Glass, the goal has been to create a cover glass for mobile consumer electronics devices that both reduces the likelihood that flaws are generated and the effect of such flaws on glass strength and breakage. They do this by working to strengthen the glass. While Gorilla Glass may be the latest of Corning’s efforts to make glass more resistant to the wear, tear and stresses of everyday life, it’s far from the first.

More than 100 years ago, Corning’s borosilicate glass was the basis for its PYREX® product lines. Because of the glass’s composition, it was not only highly chemically-durable but also capable of withstanding an incredibly wide range of temperatures without succumbing to thermal shock, which made it ideal for cookware and labware applications. Decades later, CorningWare® was developed, furthering the ability of Corning’s cookware to withstand rapid changes in temperature. But, it’s important to note that CorningWare® wasn’t glass, exactly. Instead, it was a glass-ceramic, which means it was melted and formed as a glass, and then thermally treated so that it partially crystallized, creating durable, thermally-stable cookware. Although Corning no longer sells cookware, these innovations laid the foundation for later work by the company to find ways to make glass even more durable.

In the 1960’s, Corning developed Chemcor® glass, a chemically strengthened glass that was intended to be used in phone booths, prison windows, eyeglasses and automobile windshields. Chemcor was strengthened chemically through a process called ion exchange, which allows smaller ions from the glass to be replaced with larger ions from a chemical bath. As a result, the surface of the glass became highly compressed, and therefore less prone to the introduction of damage and the application of stresses that could lead to breakage.

Chemically-strengthened glass such as Chemcor was developed as an alternative to thermal tempering, which is still how most glasses are strengthened today. Thermal tempering involves heating glass up to high temperatures and then cooling it quickly such that the outside cools much faster than the inside. This process puts the glass core in tension and results in a compression layer on the outer surface, making the glass stronger and more resistant to flaw propagation and failure.

The ion exchange process was developed because thermal tempering is limited for thinner glasses. As glass gets thinner, it becomes more difficult to set up a substantial difference in cooling rate from its core to its surface, which makes thinner glass harder to temper. As a result, thin glass must be chemically strengthened instead.

Chemcor was designed to be chemically strengthened, although it did not ultimately find its way into the intended applications as a fully-commercialized product line. However, decades later in 2005, Corning executives realized that there would soon be a need for a strong, durable glass that could be used on a variety of mobile electronics applications. While Chemcor was not the right product for mobile consumer electronics, it and the history of chemical strengthening offered scientists an entry-point.

The result was Gorilla Glass: a different glass composition and product than Chemcor. Significant compositional and ion-exchange processes were invented to achieve superior product characteristics including outstanding damage resistance and retained strength, while also optimizing the glass for production on Corning’s proprietary fusion-draw manufacturing process.

That process bore fruit just two years later, when the first generation of Gorilla Glass was released on first generation smartphones. That journey has continued and Corning is on its sixth generation of strengthened glass with Gorilla Glass 6.  Today, Gorilla Glass has served as a cover glass on more than 8 billion mobile devices around the world. It’s the result of decades of work researching ways to strengthen glass and a belief that core research is worthwhile, even if it means developing technologies that may require patience before finding their ‘perfect match’ in terms of market and application.

Our history of strengthening glass stretches back decades. It’s that history, and the knowledge that comes with it, that allows us to remain at the forefront of work to make glass a stronger, more durable material.

Corning is celebrating the 150th anniversary of the Periodic Table by spotlighting a few elements that are vital to our work, along with some of our scientists' sentimental favorites.

How Glass is Made

Glass has become so commonplace today that it’s easy to see right through it without a second thought.

Glass: The Ultimate Tool in the Materials Science Toolbelt

Being a materials scientist is all about knowing how to make the right selection.