When a COVID-19 vaccine is ready, Valor Glass vials can help deliver it to the masses with increased quality and speed. 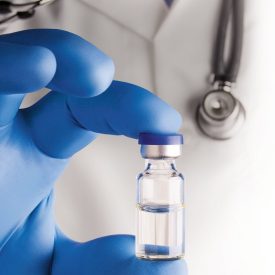 Scientists are racing to discover a COVID-19 vaccine, yet next will come the challenge of making and distributing billions of doses as fast as possible. The pharmaceutical industry has never done anything like it.

A recent invention by Corning – a radical new kind of glass composition for vaccine vials – might typically attract little attention outside the pharmaceutical industry. But now it stands to play a significant role in getting more vaccines to more people as quickly as possible.

The glass, called Corning Valor® Glass, took nearly 10 years to develop and bring to market, and is ready to play its part in the global effort to defeat COVID-19. Valor Glass solves problems that have limited the production speed of vaccines for decades, and it could help manufacturers nearly double the pace of filling vials. At the same time, Valor Glass can eliminate a vexing safety problem: traditional vaccine vials can delaminate, or shed tiny flakes of glass in the vaccine, which can lead to adverse effects for those receiving the vaccine.

Several pharmaceutical companies are currently evaluating Valor Glass for use. Most recently, Pfizer signed a long-term purchase agreement with Corning. Pfizer is one of at least 125 entities chasing a COVID vaccine. Recognizing the potential impact of Valor Glass, the U.S. government’s Biomedical Advanced Research and Development Authority (BARDA) has granted Corning $204 million to ramp up manufacturing of Valor vials.

Valor’s role goes deep into the heart of how vaccines get manufactured and then delivered to doctors and clinicians.

Once scientists create a vaccine, the vaccine has to be made in large batches – much as beer, for example, first has to be brewed in vats before getting packaged and shipped. Some vaccines in the U.S. are made by growing vaccine viruses in eggs – a process that’s been around for 70 years. Newer methods, approved in the past decade, are cell-based production and recombinant (or synthetic) production. Any of the methods result in vaccine viruses suspended in a liquid.

Just as beer has to be bottled, vaccines have to be put into small vials that contain anywhere from one to 10 doses each, then sealed and packaged for distribution. That’s done in highly automated factories, with machines filling and capping vials and the vials zooming through assembly lines, rubbing and bumping against each other.

That rubbing and bumping of vials is the catch. For as long as vaccines have been made, they’ve typically been packaged in vials made of what’s called borosilicate glass. But borosilicate vials can haunt a vaccine factory. Friction on the outer surface can make the vials bunch and cause back-ups – not unlike a traffic jam – in the machinery, leading to damage and breakage. The glass can also flake off on the inside – called delamination – when this occurs, the particles of glass can contaminate the vaccine.

So vaccine manufacturers have had to choose between two difficult options: either run the line more slowly so the vials bump and rub less, or speed up production and run the risk of glass-related problems, including the possibility of those that could force the whole line to be shut down or result in recalls of vaccines already shipped. All in all, the conventional glass can cost the industry hundreds of millions of dollars a year in lost production. 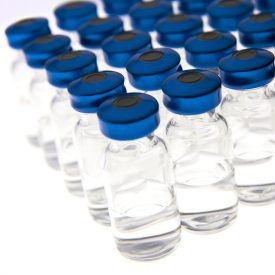 The development of Valor Glass started back in 2011. Wendell Weeks, chairman and chief executive officer for Corning, served on Merck’s board of directors from 2004 through 2019. Merck executives approached Wendell and asked if Corning could help resolve manufacturing concerns Merck and other pharmaceutical makers were making with traditional borosilicate vials. That interaction led Corning and development partners, Merck and Pfizer, to work on the development of a new glass to address some of the issues facing the pharmaceutical industry. Both companies knew there would be huge hurdles, including the need to get approval from the U.S. Food and Drug Administration for the use of the new packaging solution.

The Corning team experimented with more than 200 different glass compositions before landing on one that worked. The resulting aluminosilicate glass is about 10 times stronger than conventional vials, and more chemically durable on the inside to avoid delamination. An external coating reduces friction, so the vials can slide past each other at high speeds with less chance of jamming together or breaking.

Pharmaceutical companies have long known how to build faster production lines, but they don’t because the conventional borosilicate vials won’t withstand the speeds. A factory using the old vials can typically fill 300 to 400 vials per minute. Tests have shown that a production line using Valor Glass can fill up to 750 vials per minute, with less breakage or other interruptions than a line using the conventional vials running at half that speed.

Pfizer joined with Merck as a collaborator in developing Valor Glass in 2017. In October 2019, a leading pharmaceutical manufacturer received FDA approval of Corning Valor® Glass for use as a primary package for a marketed drug product. Pfizer recently signed a long-term purchase and supply agreement for Valor Glass. The grant from BARDA was announced in June of 2020 with the funding to be used to help defray the costs to expand and establish Valor Glass production capabilities in Durham, N.C., Big Flats, N.Y., and Vineland, N.J.

Production of Valor Glass is gearing up to be ready for that magic moment when COVID vaccines are approved for the general public, likely by early 2021 or even earlier. That’s when the sprint to make and package billions of doses will start, and where Valor Glass can make a world-changing impact.

Corning will receive $204 million from the...

Corning will receive $204 million from the Biomedical Advanced Research...

Corning provides information about our...

Corning provides information about our response to COVID-19 --deploying...