Lithium metal batteries using solid electrolyte separators have emerged as one of the most eagerly awaited energy trends of the decade. 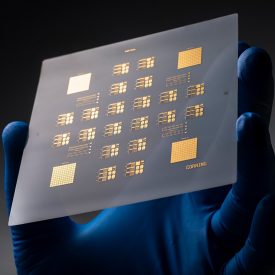 Corning has developed a revolutionary roll-to-roll (R2R) ceramic processing method to manufacture high quality, fully dense ceramic ribbon in a R2R format, which is an important accomplishment in the processing of inorganic materials.

They're not yet available on the mass market, but environmentalists and tech gurus are already hailing them as a reliable way to power everything from consumer electronics to next generation electric vehicles. Experts suggest they'll help society transition to a greener, less carbon-dependent economy. They're also notoriously difficult to create.

But Corning's deep knowledge of both ceramic science and manufacturing has the company poised to break through some of the practical barriers and capitalize on the next generation battery trend as it unfolds over the coming years. Why the excitement around lithium metal batteries?

For starters, they're the first step-change in mobile energy storage since rechargeable lithium-ion batteries came on the scene nearly 30 years ago. Enthusiasts believe lithium metal batteries built with ceramic separators offer longer battery life, and in some cases lighter form factors, as well as improved thermal stability largely due to the reduction of flammable liquids that are in contact with lithium metal.

To understand why, look at basic battery structure. All batteries contain layers that create an environment for complex, electro-chemical reactions – which, in turn, release energy.

Lithium-ion batteries – like the one powering your phone and tablet right now -- feature a reducing anode (typically made of graphite) and an oxidizing cathode (made of lithium and other chemicals). A porous polymer separator containing liquid electrolyte prevents these two layers from touching. Migration of lithium ions through the layers prompts an electro-chemical reaction which, in turn, releases the energy to power a device.

Lithium, a lightweight metal, would be the ideal anode in battery applications as it has no inert structure like graphite that takes up space inside the battery. But it's highly reactive and prone to forming "dendrite" spikes as the battery is used and recharged. These can degrade the traditional separator used in today’s lithium-ion batteries causing internal short-circuits that lead to failure of the cell and in some cases a fire.

Lithium metal batteries are also built-in layers. The solid electrolyte separator and anode layer – made of pure lithium metal as the name implies-- can also be very thin, making the battery smaller than lithium-ion batteries with the same energy (runtime or range).

The challenge comes in getting the right mix of elements to safely harbor the massive amount of energy passing through a small space – then manufacturing the battery in an affordable way. Over the past five years, Corning scientists have been testing promising new solutions to both problems.

On the materials side, Corning is particularly interested in lithium garnet, so named because its crystal structure resembles that of the deep-red gemstone. Lithium garnet is a good conductor of lithium ions and is an effective solid replacement for polymer separators containing liquid electrolytes, said Dr. Scott Silence, Ribbon Ceramics program director.

"Lithium garnet is one of the very few materials that can stand up to lithium metal as an anode and not degrade and limit the life of the battery," he said. "When it's stable, you can use it and recharge it many times."

Lithium garnet produced on the ribbon-ceramic platform is still in research and development. But the research team believes that thin lithium garnet sheets – some measuring as little as 20 microns thick – could enable stacking many very thin layers within a lithium metal battery, thus exceeding today's lithium battery energy-storage capacity by more than 50 percent.

"We're excited about lithium garnet because we can make it useful," said Dr. Mike Badding, Senior Research Associate.  "And one of the ways we make it useful is by producing it in a scalable process. That's how our knowledge of the material comes together with our ability to manufacture ribbon ceramics." 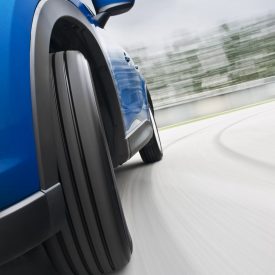 But smaller applications will come first -- potentially in your earbuds or for other specialty uses. Corning is in early-stage development with some consumer electronics partners that could introduce lithium metal battery solutions in future products.

"With something like electric vehicles, the reliability demonstration and cost pressure are extreme. It seems much more likely that if you can demonstrate advanced battery technology in a smaller application where you can tolerate a higher initial cost -- and where lifetime requirements may not be as stringent -- you can use it as a demonstration tool," said Scott.

Many companies are working on new lithium metal battery solutions, and conventional lithium-ion batteries are still being improved upon, too. Competition is intense.

"It's a dynamic technology and we've seen remarkable improvements in both the conventional and competing solid electrolyte technologies," said Mike. "Nobody's standing still."

That's true at Corning, where a broad team is working on not only separator layers made from lithium garnet, but on Ribbon Ceramic-generated cathode layers as well.

"Ribbon Ceramic cathodes could also open up the possibility of high-energy density batteries for applications like consumer electronics," said Scott.

"The market is enormous, our team is capable and growing, and we are in early days for developing different applications," he added.

"But one thing we know for sure – there's a societal need for inexpensive energy storage if we're going to get to carbon-free goals."