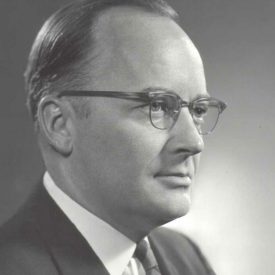 Dr. William H. Armistead began his career at Corning in 1941 as a glass composition chemist. He invented more than fifty new glasses and authored or co-authored 46 patents, including one that most visibly affected our daily lives—color television glass.

During his long career with Corning, Dr. Armistead distinguished himself as a researcher and manager who guided Corning technology through some of the company’s most interesting and commercially rewarding years.

In 1954, Dr. Armistead was appointed Director of Research, a position he held until 1971, when he was appointed vice-chairman for technology. As director of research, Armistead increased Corning’s focus on exploratory research and expanded the technical staff to include experts from many disciplines.

Dr. Armistead also had the vision to globalize R&D. In 1968, Corning established a small research laboratory in Avon, France. Today, Corning research facilities around the world, including in Japan, Taiwan and Russia, have made his vision a reality.