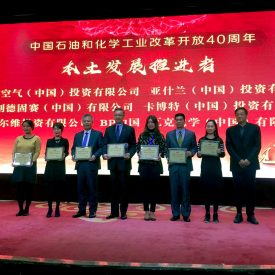 Corning® Advanced-Flow™ reactors (AFR) received the “Local Development Champion” Award (本土发展推进者) from the China Petroleum & Chemical Industry Federation (CPCIF) and China Chemical Industry News (CCIN) for excellence and success in promoting technology and business development in China as an MNC (multinational corporation). The award recognizes MNC’s contributions to China’s Reform and Opening Up policy, celebrating its 40th anniversary in 2018 (1978 -2018). Corning AFR was one of 15 companies to receive this recognition.

Corning Incorporated began local development in China 38 years ago and has participated heavily during China’s reform and growth period over the past 40 years. Starting with only 15 individuals working from a trade-office in Beijing, Corning expanded to almost 5,000 employees operating across the region as part of Corning China in 2018. AFR entered the Chinese market in 2010 through a collaboration with Changzhou University and has since expanded into a full-capacity facility, Corning Reactor Technology Center (CRTC) in Changzhou, China.

“China’s chemical community and the Chinese government have recognized AFR’s efforts in China over the last eight years,” said Yi Jiang, business director, global Advanced-Flow reactors, and innovation officer, Corning Greater China. “This award was made possible by the hard work, passion, and persistence demonstrated by our teams, both in China and globally.”

The award was presented during an event in Taiyuan, Shanxi province that recognized the significant milestone of reform and Opening Up, a policy created by former Chinese leader Deng Xiaoping, and now continued by current President Xi Jinping. The program was ratified in December of 1978 and established policies aimed at bringing China more in-line with the global economy. This goal reached a significant milestone when in 2001, China joined the World Trade Organization (WTO).

“Corning has consistently demonstrated a strategic alignment with initiatives focused on China’s high-growth markets by concentrating on disruptive innovation,” said Yi. “AFR’s technology provides inherently safer solutions to China’s pharmaceutical and chemical industries, which have been in fast-growth mode over the past few years.”

Yi’s comments align with those made by Chinese government officials in recent years. China has committed to high-quality development and safer manufacturing practices in future economic and regulatory initiatives.

This award is not the first time that CPIF and CCIN have recognized AFR. Both organizations highlighted AFR’s alignment with China’s high-quality and green growth initiatives. One of China’s National Priorities is the shift away from “fast-growth” over the past 40 years, to “quality growth” over the next 40 years. In January 2017, the Chinese State Administration of Work Safety (SAWS) recommended microchannel flow reactors and processes as an inherently safer solution for high-risk chemical reaction processes in the fine chemical industry. Government and industry representatives also selected microchannel flow synthesis processes as one of 20 green chemical processes in 2018.