We have a long-term view of energy conservation that includes the environmentally responsible and cost-effective use of energy in our facilities around the world.

We have a long-term view of energy conservation that includes the environmentally responsible and cost-effective use of energy in our facilities around the world. 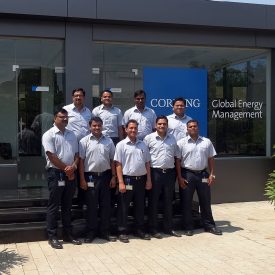 The Pune site energy team has been busy in 2016 with energy-saving projects and even had a special GEM-branded meeting space built at the facility.

A new car park at Corning’s Optical Communications facility in Pune, India, combines two hopes for good fortune: its horseshoe shape, a symbol of luck in Indian mythology, and the array of solar panels that absorb the sun's energy while shading the 60 cars underneath.

"On summer days, when employees get into their cars at the end of the day, their cars' interiors can make them feel like they're laying tar in the hot sun," said the site’s energy manager with Corning's Global Energy Management (GEM) program. The park's new solar panels put that hot sun to work rather than wasting the solar energy.

The structure, located just outside the main entrance, shows visitors the importance of sustainability initiatives at Corning. The new solar array adds 125 kilowatts of energy to the plant's grid, which is enough to power 150 homes in India annually. Just last year, the site energy team brought a rooftop array online, and has plans for more installations.

The facility also completed a visitor's office that boasts the GEM logo and uses the renewable, green energy provided by the facility's solar arrays.

"The Pune employees are really proud that Corning invested in this green initiative," the site energy manager continued. "It shows them that Corning cares."