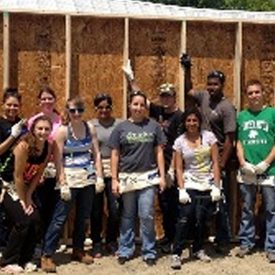 As volunteers for Habitat for Humanity, Corning summer interns are on site to give time and sweat to help build a home — and team camaraderie — for a single mother and her children.

A group of interns completing their summer at Corning have done more than build their professional skills and resumes — they’ve also helped build a house for a family of four, collaborating and living the Values in classic Corning style.

Sixteen interns — with the help of two former interns who are now full-time employees — spent part of an early-August weekend as Habitat for Humanity volunteers, putting in more than 112 hours of labor constructing a new house for a single mother with three children.

“It was a really good teambuilding experience,” said project organizer Matt Della Vecchia, an MBA student at Binghamton University and an intern with Information Technology.

Matt organized several community events while in Boy Scouts and has continued to volunteer throughout college. When he started his IT internship, “I was originally looking to plan an IT intern volunteer event, so I reached out to a bunch of different local organizations and two got back to me,” said Matt.

He and his fellow IT interns spent a Saturday gardening and working outside at the Chemung County SPCA. When Habitat for Humanity also responded to him later on, Matt decided to organize another event and expand the opportunity to all Corning Valley interns.

Danielle Wyckoff, who is about to return to Marist College in Poughkeepsie to complete her master’s degree in information systems, was on wall-construction duty for the Habitat project.

“It was a really good activity. It was a lot of work and made you feel like you were making a difference to people.”

It was also clear to her, she said, “that Corning is really committed to the community and life in the area – other companies aren’t so much into that.

“I love the tight-knit family community here — and the fact that Corning cares about people whether they work for the company or not.”

Matt said that, though he has lived among the interns this summer and become friends with many, he met several more at the event.

“When you work together to achieve the same thing, it forces you to connect with people,” he said, noting organized intern volunteer events for future classes could be extremely beneficial. “I just hope it inspires others to be active in any way possible.”