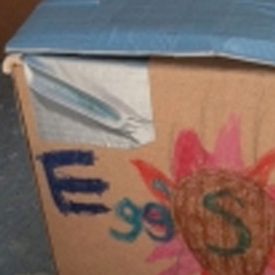 Students and Corning volunteers used eggs to discover engineering principles. They designed various packages for the eggs, like above, and dropped them from 30 feet onto a gymnasium floor to test which designs successfully protected the eggs.

They may be enjoying lazy summer days now — but several dozen elementary school students are also likely reflecting on the recent fun they had encasing delicate eggs in everything from peanut butter to pillows, then seeing if the eggs would survive a 30-foot drop onto a gymnasium floor. And if Corning volunteers have their way, the students may also be starting to think of themselves as future engineers.

The students cushioned their eggs with a variety of soft and sticky materials; constructed helicopter-like blades modeled after a pinwheel; and built nesting containers similar to a matryoshka doll.

“They definitely put a lot of thought into their designs,” said Cecilia Magee, a process engineer who volunteered with the students. “They didn’t just look at one aspect, but built redundancy into their designs so the eggs would survive.”

After crashing onto the gym floor, nearly half of the eggs remained intact.

Now in its second year of involvement with Corning volunteers, the egg drop is also part of a broader effort by Environmental Technologies division engineering to share its expertise with the community.

"It’s one thing to study science and math in grade school,” said Chris Malarkey, senior engineering associate at the Erwin plant and coordinator of Corning’s role with the egg drop. “It’s another to have someone who has a career in engineering come and inspire you. It exposes kids to how you can use math and science in a job, and how it’s actually fun.”

The event began with students examining a Corning® Celcor® substrate and extrusion die, and answering questions to learn how the substrate was made. Corning employees then described their backgrounds, how they became interested in science and engineering, and what it’s like to work in their industry.

The second part of the visit was devoted to rating each student’s design and suggesting improvements. It was clear that the children had considered principles such as drag and momentum.

“Their designs had guidelines and constraints around height, width, depth, and weight — all focusing them to ask questions and challenge everything,” said Krishnan Vishwanathan, a project leader with division engineering. “We wanted them to ask: Why do we need to do it this way? What happens if I change this? Whether you’re designing an egg drop container or mixing two chemicals in a lab, you need to be inquisitive and ask questions.”

Based on their comments, students left the egg drop wanting to learn more about engineering. At the end, one child asked the Corning employees, “Can I come to work with you?”