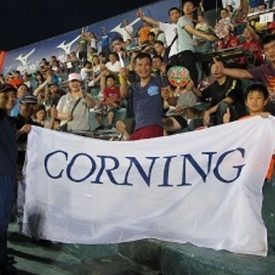 Corning employees and their families spend a summer evening watching a baseball game at an annual company event in Tainan, Taiwan. The Corning banner lets the crowd know they came as a group to support a community activity.

Baseball — though founded in the U.S. — has a huge following in Taiwan, home to 17 Little League World Series champions and many current and former Major League Baseball players. So it only seemed fitting that the setting for a Corning Display Technologies Taiwan plant outing was the Tainan city baseball stadium.

Gathering on a hot Sunday afternoon in the ballpark, Corning Tainan employees and their families enjoyed the plant’s annual event at the stadium, where they could watch the game, cheer for their favorite team, cook their own barbecue, and generally enjoy time with family and plant colleagues.

What made the afternoon even more special was the team’s invitation to students from schools near the plant to share in the festivities. As a result, more than 100 students and their parents joined the Corning family for the fun-filled afternoon. Many of the students who play for their school's baseball team showed up wearing their uniforms.

“It is great and exciting to have hundreds of employees getting together to watch a baseball game,” said Ellison Chung, Corning Display Technologies Taiwan, Tainan plant manager. “And the activity is a good approach to enhance a positive working environment in Tainan plant and build good community relations with our neighboring schools.”