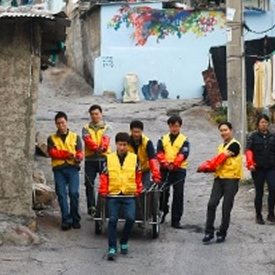 On a cold, wet day, six Corning employees use ropes to steer a large bin of coal briquettes downhill through a neighborhood in Seoul, Korea. Their efforts helped to deliver the fuel to hundreds residents.

The work can be dirty. The loads can be heavy, and the hilly city streets can be tough to climb. But Corning employees in Korea kept a smile on their face in late November as they volunteered to lug large coal briquettes to low-income Seoul residents — a tradition that is now in its fifth year.

On a wintry November day, 23 Corning Korea employees joined volunteers from four other locally based companies to deliver about 2,000 coal briquettes to needy residents living along the steep, narrow alleys in the city’s Junggaebon-dong, Nowon-gu district. The briquettes — made of compressed coal dust and weighing 3.5 kilograms (7.7 pounds) — are the sole source of heat for some 4,000 Seoul residents who rely on it to cook and stay warm.

“Corning Korea has been participating in various volunteer works, and this briquette delivery is the one we participate in every year,” said HH Lee, president of Corning Korea Company Ltd. “This is a very meaningful event because we can help our neighbors get through the cold weather, and also have some time to look around ourselves and appreciate how we are grateful for what we have.”

Corning employees have participated in the briquette distribution since 2009 — they took off one year to do another volunteer project. They brave the cold and hike the streets to help the non-profit Briquette Bank with deliveries of the donated coal to hundreds of households that have not switched to oil or gas like most other Korea residents. In fact, throughout the country, an estimated 167,000 households still use the briquettes — called yeontan — to heat and cook.

For those homes receiving the briquettes, the delivery is as valuable as the briquettes themselves. The coal briquettes each cost about 600 won (60 cents U.S.) but can go higher for greater delivery distances. The typical delivery cost per briquette is about 500 won (50 cents U.S.), which is why the Corning Korea delivery tradition is such an important contribution to the Briquette Bank’s cause.

“Because Corning Korea has been participating in this event every winter, all members are significantly faster and more collaborative compared to other volunteer workers,” Ji-Young said. “And it was great to see all the members work in a bright mood with smiles.”