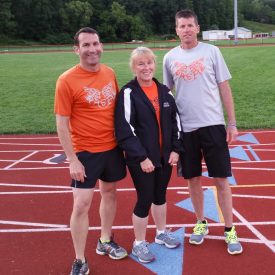 The club's coaches, who are also Corning employees, dedicate 25 hours a week to running the team.

Team PREFO, named in honor of legendary runner Steve Prefontaine, was created in 2011 to help develop athletes for high school teams in the Corning Valley. In the current spring and summer season, Corning employees who are both well-known marathoners in the Corning Valley are helping to coach about 150 children ages 4 to 17 years old for 10 to 12 meets. A fall cross-country season attracts about 90 runners for eight to 10 meets, and five or six indoor track meets in winter attract 40 to 50 children.

The children, who train several nights a week during the summer at public parks and tracks, run for many reasons. The children range from beginners and recreational runners to those keeping in shape for school sports or training for national events.

The coaches' goals go beyond promoting fitness, said one of the coaches and a Corning employee. "For me, the most rewarding part of coaching is watching the kids grow both as athletes and individuals," he said. "To watch some of the quietest children go from being shy, average athletes to leaders on and off the track is exciting."

Not all of the athletes will be competing forever, but they are building networks and habits that will last a lifetime.

A June meet in the Rochester, N.Y., area showed some of the character of the Team PREFO athletes. Competing in a constant downpour, the athletes brought home 22 gold medals, 11 silver, and 11 bronze.